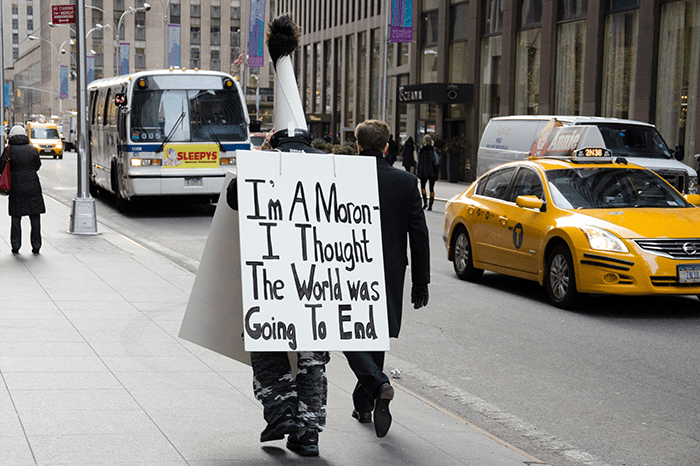 Steve from Florida (formerly Bobo) walks the streets of New York in a dunce hat Photo: The Howard Stern Show

Howard read a story in the New York Daily News about a company named Thinx that specializes in “period panties,” leading him to wonder during Wednesday morning’s show: “What the hell are ‘period panties’?”

Being the Stern Show’s resident expert on women, Robin explained. “You know women don’t wear their regular cute little underwear when they’re on their period,” she said.

Howard admitted he had no idea.

Robin further explained that while a lot of women simply save old underwear to use during this time, companies seem to have popped up offering a more chic offering.

The discussion was productive in that it ultimately led to some inspiration for the forthcoming visit from Steve from Florida, who will be returning to the Stern Show studio soon in hopes of winning back the “Bobo” name.

Howard teased that Steve would be taking a walk of shame similar to Cersei Lannister’s in “Game of Thrones” and wondered if it might add to the experience if he were wearing a pair of period panties, too. Robin suggested he could wear a thong or mankini as well.

Either way, Shuli Egar revealed that Steve’s biggest fear is that Fox News or the staff from “Tonight Show Starring Jimmy Fallon” will also capture footage of the event since they’re in the same vicinity of the Stern Show.

“He’s so delusional,” Howard responded with a laugh.