From afternoon naps to late-night parties, the Stern Show staffers had quite the trip 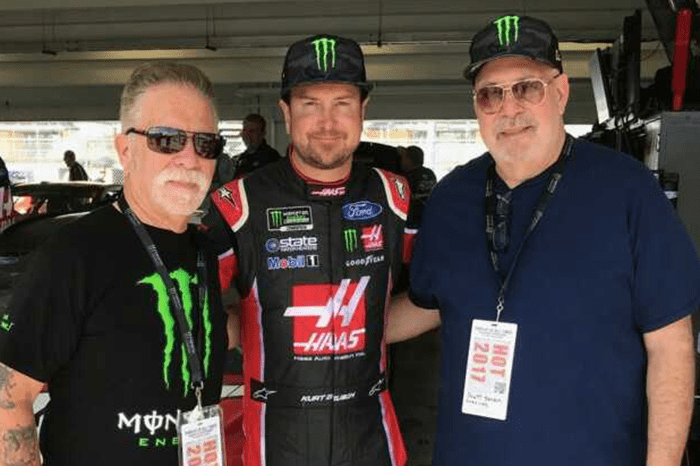 After “hemming and whoring” about his decision to take Scott “the Engineer” Salem on vacation to watch a NASCAR race in Florida, Ronnie “the Limo Driver” Mund reported back about their trip on Monday morning.

Things got off to a rocky start as Scott began live streaming the journey on Periscope and attempted to entertain fans who tuned in. “We’re taking Route 69!” Scott can be heard joking in the video (below).

LIVE on #Periscope: Ronnie and Scott in Florida https://t.co/vTPqiThDOi

“No offense … I think the last time that he went out was the last time we went to a race, which was 15 years ago. So, when he does get out, he doesn’t know what to fucking do,” Ronnie theorized.

While the two attended a few exciting parties together—including one sponsored by Monster Energy Drinks—Ronnie admitted he tried to ditch Scott once or twice, but wasn’t able to shake him. For his part, Scott said he wasn’t afraid of getting ditched. “I was in control of the Uber account, so he couldn’t leave without me,” he told Howard, pronouncing it “you-ber.”

But Ronnie argued it was Scott’s reluctance to actually use the ride-sharing service that led to multiple disputes between them, especially when it was time to decide where to eat. “I ask you, ‘What do you want to eat?’ and two days we end up at the fucking restaurant at the bar in the fucking hotel eating a turkey-fucking-sandwich,” Ronnie said explaining how Scott refused to either pick the restaurant or take a $6 Uber ride to South Beach where they would be able to find a suitable spot to eat.

Shuli thought he understood the situation. “Scott wanted it all taken out of his hands,” he said.

The one instance when Scott did offer to pick a restaurant, Ronnie recounted how he accidentally led them to a grocery store instead.

“He’s not an appreciative person,” Ronnie contended, telling Howard that instead of being thankful for each experience on the trip, the Stern Show engineer seemed to feel entitled to certain things.

For instance, Ronnie recalled how a friend from NASCAR was hooking them up with good seats at Homestead, but throughout the entire process, Scott would badger him about where they would be sitting.

Scott also caught some heat from fans online for his race attire (below), which consisted of a pair of shorts and long grey socks.

“I didn’t want to say nothing—there’s a hole in the ass and he’s wearing these socks,” Ronnie said with a laugh.

Despite the ribbing, Scott told Howard he had a great time on vacation, including when the two took time to recharge and indulged in corresponding afternoon naps. “Ronnie hooked us up. It was awesome,” he said.