But what the Emmy winner really, really wants is to host “Wheel of Fortune” 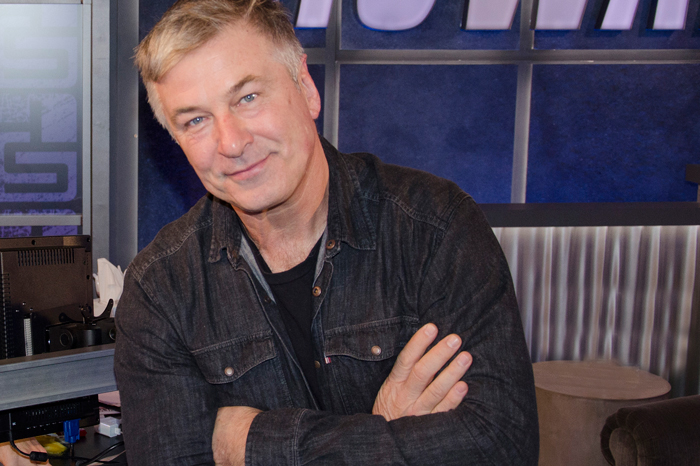 What started out as a quick cameo on “Saturday Night Live” playing then-presidential candidate Donald J. Trump has turned into the role of a lifetime for Alec Baldwin. Aside from a second straight season of portraying Trump on “SNL,” Baldwin is now offering fans a satirical look at the president’s first 100 days in office in the parody memoir “You Can’t Spell America Without Me,” co-written with Spy magazine co-founder Kurt Andersen. On Monday’s Stern Show Alec told Howard his decision to put out this book quite literally started out as a joke.

While at an event to promote his autobiography “Nevertheless,” released last spring, Alec was asked what he would be working on next. “I jokingly said, ‘Oh I’m gonna write a parody memoir of Trump’s first 100 days in office.’ And they all burst into applause,” Alec recalled for Howard. “So I lean over to my agent, I go, ‘We gotta get on this right away.’”

Putting out such a book fell under the agreement Alec has with “SNL” creator Lorne Michaels, who technically owns the characterization that Baldwin does on the late-night series. “My rendering of it is his intellectual property,” Alec explained. “As it should be.”

Alec also credited his former “30 Rock” costar Tina Fey for first suggesting he should portray Trump and pointed to “SNL’s” writers as the ones who write the material that makes him such a hit on the show.

“I just showed up,” Alec said.

As modest as he was on Monday, Alec’s greatness was undeniable at the 2017 Emmys where he won an Outstanding Supporting Actor in a Comedy Series award for his work on “SNL.” Kate McKinnon, who became a household name for her impression of Hillary Clinton, also won that night, as did the show itself, winning the Emmy for Outstanding Variety Sketch Series.

“It was satisfying to be part of an evening where ‘SNL’ were the big winners,” Alec told Howard. As a record-breaking 17-time guest host, Baldwin has a connection with the late-night series unlike anyone else.

With rave reviews still coming, Alec plans to continue playing the president on “SNL.” He also suggested audiences might soon see his Trump impression on the Great White Way. “We may take the book and turn it into a one-man show on Broadway,” Baldwin announced on the Stern Show. That production would also be overseen by Michaels, though Alec didn’t say if any formal plans were in place for the show.

During his interview with Howard in April, Alec demonstrated how he pulls off his famous POTUS impression, explaining it takes contorting his face and pretending he’s about to “bite the face off of” the person in front of him. He demonstrated a few of his other spot-on celebrity impersonations on Monday, including Al Pacino and Tony Bennett. The key to nailing both of their voices has to do with over amplifying one section of a sentence.

“You kind of rip it on a certain word,” Alec said, adding “I call it the boom.”

Check out the audio of Alec Baldwin doing his Pacino and Bennett impressions (below).

Between appearing on “Saturday Night Live,” starring in upcoming movies like “Mission: Impossible 6,” and hosting the ABC revival of “Match Game,” one could consider Alec the hardest working man in show business.

“I have a bread route, too. I deliver bread out in Queens,” he joked to Howard.

Alec will also soon be shooting a new talk show pilot for ABC. While he couldn’t say who his first guest lined up was, he promised Howard they were “one of the biggest entertainers in show business.”

But even with all that work, Alec told Howard there was still one job in Hollywood he wishes he could have: hosting “Wheel of Fortune.”

“I say to my agent, ‘Let me know when Pat Sajak is done because I’m gonna do that show every night,’” Baldwin admitted, assuring Howard he was not making a joke.

Finding the time to do all of these projects might be challenging for Alec, though, who is expecting another baby with his wife Hilaria, their fourth together. The running joke at their house is that you have to watch where you sit since there could very well be a kid under every couch cushion.

“I’m obsessed with my kids,” Baldwin said. “I’ll look at my calendar and I’ll go, ‘I won’t be with my kids that night, so these next two nights I have to be with them.’”

Before leaving the studio, Howard wanted to play Alec a little holiday music and he gifted him with a new Christmas song sung by Robin Quivers. Needless to say, her rendition of the Bing Crosby classic “White Christmas” left Alec laughing.

“They don’t make Christmas songs like that anymore,” he said. “I don’t know what to say. I’m blown away.”

Baldwin also offered a compliment to Howard who, according to Baldwin, continues to set the standard in guest interviews.

“This is the best venue there is. This show with you is the best show. It’s my favorite show to do,” Alec told Howard.

Alec Baldwin and Kurt Andersen’s new book “You Can’t Spell America Without Me” is available now.