“Goldie withdrawal is a real thing,” comedian says of her A-list movie mom

Amy Schumer’s new movie “Snatched” has plenty of stars in it, including Goldie Hawn, Wanda Sykes, and recent show guest Ike Barinholtz. But on Wednesday’s Stern Show, Amy told Howard the real scene-stealer might be her own boob, which pops out at one point in the film.

“My right tit … full nip,” Amy said of the comical nude scene which occurs after her character gets driven home on a motorcycle while intoxicated.

Since it’s only one boob that makes an appearance, Howard wondered if Amy had a preference for which one she showed.

“The right one is the star and then my left one’s, like, the runner-up,” she said. Baring her breast on camera was Amy’s idea, too. “It was planned. Oh yeah, I wrote it in. It’s so unnecessary,” she told Howard. “I just thought it was funny.”

“It felt good to shoot it. Like, it was kind of empowering,” Amy continued. “Let’s have them looked at before they’re on the floor.”

Even without her boob flash, Amy told Howard “Snatched” still would have received its R rating because of the movie’s other shocking moments, including one featured prominently in the trailer with co-star Goldie Hawn spitting up what she believes to be whale semen all over Amy’s face.

Amy remembered pitching that joke to her sister Kim, Goldie, writer Katie Dippold, and director Jonathan Levine. “They all just kind of stared at me,” Amy recalled. “Except for Goldie who went, ‘That’s funny.'”

Of course, the wet and wild scene made the movie’s final cut, as well as several other gags that both Amy and Goldie agreed should be in the film. “Goldie and I had no disagreements about jokes,” Amy told Howard. 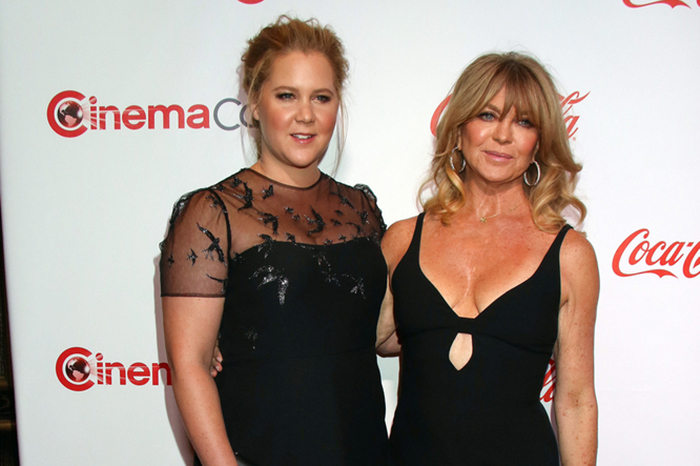 Since Goldie played Amy’s mom in the movie, which shot for three months in Hawaii, it’s no wonder the two actresses formed a bond.

Once “Snatched” wrapped, Schumer admits she felt a somewhat “creepy” longing for her co-star. “I missed her a lot, and I like missed her smell,” Amy said with a laugh. “Goldie withdrawal is a real thing.”

Amy told Howard she’s still dating her boyfriend Ben whom she met on the exclusive dating app Raya, which boasts many high-profile Hollywood members. She signed up for the app with her “Trainwreck” co-star Vanessa Bayer “as a goof,” but before she knew it she had met her “normal” furniture-designing man.

“I was only on there for 48 hours,” Amy told Howard of how quickly she and Ben matched.

When it came time to plan her first date with Ben, Amy revealed she was feeling tired and asked if he wanted to just come have a drink at her place. Amy’s sister Kim had to explain to her why a woman probably shouldn’t invite a stranger into her home.

“She keeps me alive,” Amy said, laughing off her mistake. “But, by the way, he was there an hour later. So, I don’t know what we’re worried about.”

According to Amy, Ben was a great catch, especially compared to some of the other guys on the dating app. “There are so many douches on there,” she told Howard, adding she saw a lot of gratuitous shirtless pics or shots of guys doing cannonballs off of a yacht. Not Ben, though, who had a photo of him dancing with his grandmother. Amy also revealed the song she used on her own profile—Steely Dan’s “Dirty Work.”

As for whether Amy and Ben will get married, she told Howard they’re not there yet. “We’re talking about today,” she explained, saying that someday she’ll want to settle down and have a family, but for now she’s happy with things just the way they are.

See Amy Schumer in “Snatched” opening in theaters May 12.