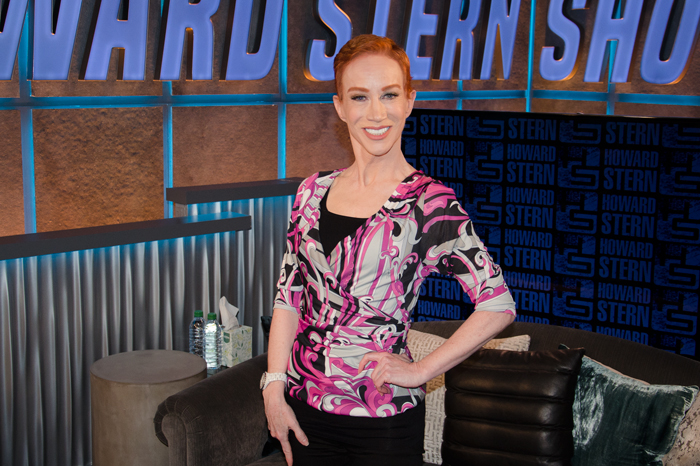 The last time Kathy Griffin stopped by the Stern Show to talk to Howard was in November 2016 — a lot has happened since that day.

“My whole life has changed since I’ve seen you,” Kathy told Howard after taking her seat on the studio couch Tuesday morning. What sparked the instant shift in both Kathy’s personal and professional life was a controversial photograph she posed for that depicted her holding the decapitated head of President Donald Trump. The image earned Kathy worldwide attention unlike any she’d ever seen and, undoubtedly, unlike any she ever wanted. But according to Griffin, no one present at the photoshoot that day predicted the level of outrage that would follow the photo’s release.

“It didn’t occur to anyone that people would take it so seriously,” Kathy told Howard. “This kind of imagery is not new to comedy.”

In the days that followed the widespread media coverage of the controversy, Kathy put out an apology video and held a press conference to try and explain why she participated in the photoshoot. Now that nearly a year has passed, though, Kathy told Howard she feels she shouldn’t have to say she’s sorry.

“You may have hated that picture and that’s fine, but I want everyone to know if you’ve got a 13 year-old kid and they put that picture on Twitter, they shouldn’t have to be under a two-month federal investigation,” Kathy explained. “That photo, as you know, is completely covered by the First Amendment.”

Her right to pose for the photo did not prevent her from being examined by the Department of Justice. “I thought my lawyer was kidding,” Kathy said of receiving the news that she was under a federal investigation. She also told Howard she was put on the no-fly list during the investigation and then routinely stopped and held at airports whenever she traveled after the investigation ended.

“I was detained at every single airport,” Kathy said of what she encountered during an international tour that took her to 23 cities in 15 countries.

While one government agency was conducting an investigation against her, another was reaching out to offer their protection after Kathy received credible death threats. The F.B.I. informed the comedian she had even wound up on a kill list with 40 other people.

Prior to the Trump photo coming out, Kathy counted many in Hollywood as some of her closest friends. But when she needed them the most, she told Howard not everyone was willing to lend her their support publicly.

“Katt Williams called me. He was the first one to call,” Kathy revealed. Her fellow comedian suggested she take out a pen and paper and start tracking who reached out to her, telling Kathy that list of names would show her who her true friends are.

There ended up being several who lent their support: Jim Carrey and Jamie Foxx both backed Kathy up during interviews, actress Aubrey Plaza visited Kathy at her home, and Bette Midler called Kathy directly. Even Debra Messing, who initially did not stand by Kathy, later emailed to say she realized she’d made a mistake by not remaining loyal to her longtime friend.

Others in Hollywood, however, did not return Kathy’s calls to them or simply told her they could no longer be associated with her. “Nobody wanted to hear a word from me. I was anathema to everything and everyone,” Kathy told Howard.

Soon, Kathy started losing work due to the photograph controversy, including endorsement deals and her spot on CNN’s “New Year’s Eve Live” broadcast. “I’m banned for life. I worked there one night a year,” Kathy said of the cable news channel. Her long-running co-host for the event was Anderson Cooper who Kathy also considered a close friend.

“I was in love with him as a friend. Like, I loved him as a friend,” Kathy told Howard. Following her firing from CNN though, Griffin said Cooper did not defend her or her actions and that the two are no longer on good terms with one another.

The fallout also affected her live tour dates. Theaters across the country were forced to cancel Kathy’s shows due to safety threats as well as threats from venue sponsors claiming they would pull their funding if she performed.

“For me to be out of work for a year … it’s tough,” Kathy told Howard. “It’s been a year since I’ve had a paid gig in my own country.”

That dry spell is coming to an end, though. Kathy will be appearing on Anthony Atamanuik’s “The President Show,” portraying current White House staffer Kellyanne Conway. She also announced during Tuesday’s Stern Show that she’ll be appearing live at Radio City Music Hall on June 25 ahead of her sold-out show at Carnegie Hall on June 26.

Returning to a U.S. stage might be the one thing that can help Kathy move past the debacle she’s been through. “There’s only one cure for that and it’s called comedy,” she told Howard. “If I can’t be making people laugh, what do I do?”

Her fans, who Kathy said never stopped supporting her, will be treated to many new stories during the upcoming live shows, including how Kathy recently hung out with rock icons Stevie Nicks and Chrissie Hynde and how she received a letter from Billy Bush.

“I worked on material night and day,” Kathy said. “I have an act now that I love doing.”