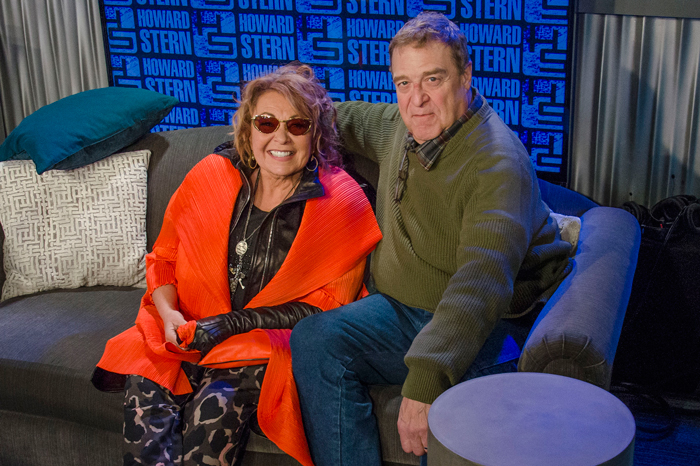 Just hours before her much anticipated return to TV, comedy icon Roseanne returned to the Stern Show on Tuesday morning for the first time since 2014. A lot has happened since that visit with Howard, including the plan to reboot her groundbreaking sitcom “Roseanne” on ABC. It was Roseanne’s TV daughter Sara Gilbert (Darlene) who gets credited for coming up with the idea to bring back the Conner family following a skit she did with co-star John Goodman on Sara’s daytime show “The Talk.”

Once the video of that mini reunion racked up millions of views online, Sara called Roseanne to see if she’d be at all interested in officially rebooting the sitcom, adding that John had already expressed his interest. “I go, ‘Well, if he’s in, I’m in.’” Roseanne recalled for Howard.

With the wheels in motion, the rest of the original cast signed up for another season without any hesitation. “Everybody said yes immediately,” Roseanne said. Howard considered that to be a true testament to how much they all actually enjoy being with each other and Roseanne agreed.

“We’ve never had so much fun and that’s the truth,” she told him.

However, there was one person who turned down an invitation to reprise his role on the sitcom. “George Clooney didn’t want to come on so that was a bummer,” Roseanne told Howard. 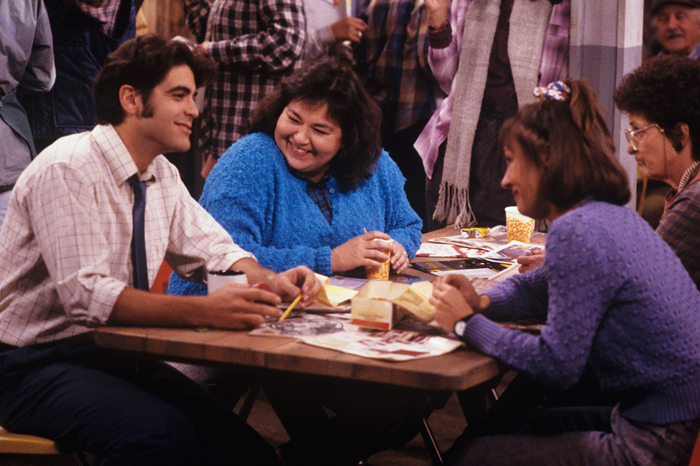 She had nothing but nice things to say about the Oscar winner, who played plant manager Booker Brooks on the first season of “Roseanne,” but revealed George was known for pulling pranks on the set when cameras weren’t rolling. Roseanne told Howard how George once took a risqué photo of his privates being covered by only a pair of Groucho Marx glasses. He also would tease Roseanne about rumors she was going to be fired from her own show by taping the name “Sandy Duncan” over hers on her dressing room, a nod to the real-life incident of actress Sandy Duncan replacing Valerie Harper on “The Hogan Family” in its second season.

Roseanne kept her job and her show shot to No. 1 in the ratings. To mark the momentous occasion, the network sent the show a giant piece of chocolate in the shape of a “1” which Clooney suggested Roseanne take out back and smash with a baseball bat since the star of the No. 1 show on television deserved something much better than candy. She not only did it, she sent the photos to the network president.

“That caused a lot of problems for me. I should not have sent that picture,” Roseanne admitted on Tuesday. “But it’s so funny.”

To trace back how Roseanne got the opportunity to have her own TV show, Howard asked about her roots in stand-up comedy. It took four years for Roseanne to perfect her act in the comedy clubs in and around Denver. Once she got to Hollywood, her rise to fame was nothing short of meteoric. On the same night that she auditioned at the famed Comedy Store, club owner Mitzi Shore approached Roseanne and told her to do 20 minutes on the feature stage, something the waitstaff later told Roseanne had never happened before.

“I love her,” Roseanne said of Shore. “She’d tell you the truth, ’cause she’s from the Midwest.”

Just a few nights later, Roseanne’s act got noticed by “Tonight Show” talent coordinator Jim McCauley who chatted with her after her set and told her he wanted to get her on with Johnny Carson. Roseanne told Howard she still remembers that moment, admitting it felt like her body was going to “explode” from excitement.

“This was my first week in Hollywood,” she explained.

Her “Tonight Show” debut went about as good as it can for any comedian back in the ‘80s – Carson called her over to the couch after she’d finished her routine.

“He motioned me over but, you know, I was really panicked so I just waved at him and left,” Roseanne told Howard with a laugh. Three weeks later, she was booked again. This time, producers told Roseanne she had no choice but to sit with the late-night host once she finished her act.

“And I’m like, ‘Oh my God, I don’t have any more clean jokes,’” Roseanne remembered. She did take a seat on the couch and answered all of Johnny’s questions. However, she told Howard she ended each of her responses with, “thank you, Mr. Carson.”

Appearing on “The Tonight Show” changed Roseanne’s life as soon after she was contacted by Tom Werner and Marcy Carsey, the producing team behind “The Cosby Show.” They wanted to help Roseanne have her own show and got her on the air with “Roseanne” in 1988. But right from the start, Roseanne told Howard there were problems.

“When I … got the first script, they had made Laurie Metcalf into me and I was Donna Reed,” Roseanne said. She supposed that some at the network wanted to make her more of a typical TV mom, one not so rough around the edges. Roseanne’s edge remained but her creator’s credit did not. She told Howard she had no idea her name wouldn’t be below “Created By” until she saw the pilot episode.

“I wanted to quit right there,” Roseanne said.

The issues continued when some of the higher-ups began intimidating Roseanne on the set. Perhaps the worst moment came when someone walked into the Conner’s TV kitchen and spit what Roseanne called a “lunger” right into the sink in front of her.

“I had stood there crying through a lot of it and my manager at the time, she’s like, ‘Do you see that your star is weeping and it’s a comedy show? Do you see that at all?’” Roseanne told Howard. “People don’t understand how sexist Hollywood is. It really is.”

Her TV husband John Goodman, who also stopped by the Stern Show on Tuesday, backed Roseanne up, both in the Stern Show studio and on the set of their sitcom.

“She had her vision. They weren’t letting her fulfill it,” John told Howard.

John also revealed how he got a call from co-star Laurie Metcalf and the two decided they needed to stand by Roseanne, no matter what. “She was the money,” John told Howard. “And plus, I was having so much goddamn fun with her.”

That camaraderie exists to this day even after all these years. Roseanne told Howard she’s been able to lean on both Laurie and John while shooting episodes for the show.

“It’s so much fun and I am very grateful to be there,” John added. “Toward the end of the show, the first run, I wasn’t very grateful … I didn’t realize what I had.”

To have the gift to go back to the show they all loved so much is one Roseanne said she certainly doesn’t want to waste. “This is a chance to get it right,” she told Howard. “Everybody is really focused and intent on creating a quality product. Everybody cares about this product so much. That’s what’s so fun.”

Another funny lady involved in the “Roseanne” reboot is its executive producer Whitney Cummings who was on the Stern Show in 2017 and told Howard how Roseanne’s performances blew everybody away when they first started taping.

“I know how to tell a goddamn joke,” Roseanne said on Tuesday with a smile.

And though achieving the ratings they had in the early ‘90s may be improbable, Roseanne does have a goal in mind for this next season of the show. “I just want to do well. I want to get renewed,” she said. One specific reason she wants to get renewed is so they can bring back a few familiar faces that they weren’t able to get back during this initial episode order, like Martin Mull and Fred Willard.

John told Howard he too is hopeful they’ll get another season, if for no other reason than he’d like “Wonder Woman’s” Gal Gadot to play their next door neighbor.

Watch the return of “Roseanne” Tuesday night at 8 p.m. ET on ABC.