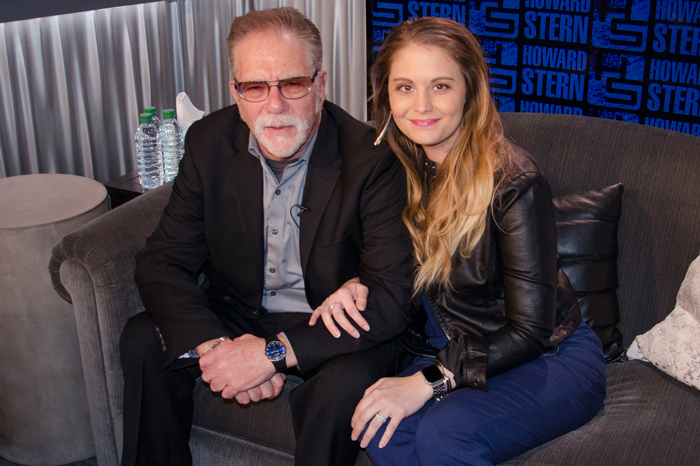 Love can be a curious thing and on Tuesday’s Stern Show, Howard attempted to make sense of the unique romance between Ronnie “the Limo Driver” Mund and his fiancée Stephanie. Despite their 33-year age difference, the two have now been together for 11 years after meeting at a bar where Stephanie was working. It didn’t take long for Ronnie to fall for Stephanie, but Howard wondered what it was that made Stephanie fall for Ronnie.

“I think what sold it was my birthday,” she explained. Back in 2007, Stephanie wanted to celebrate her 24th birthday with Ronnie but he couldn’t take her out that night since he had to be up early for work the next morning. Instead, he threw her a big party that weekend and invited her friends and family. The two consider that night to be their first date together.

“When I met him … I never would’ve guessed his age,” Stephanie said of Ronnie. “I knew he was older and I was fine with that.”

Going out with older guys wasn’t new for Stephanie, either. She told Howard even back in high school she was dating an upperclassman during her freshman year.

“This is the oldest, obviously,” Stephanie said with a laugh.

“There’s not much older,” Howard joked.

In 2016, Ronnie surprised Stephanie by proposing to her over the phone live on the Stern Show, albeit with a little help from Howard, who was the one to actually ask his bride-to-be if she’d marry him. On Tuesday, Stephanie said Ronnie still hasn’t actually said the words “Will you marry me?” to her, but she enjoyed the proposal. 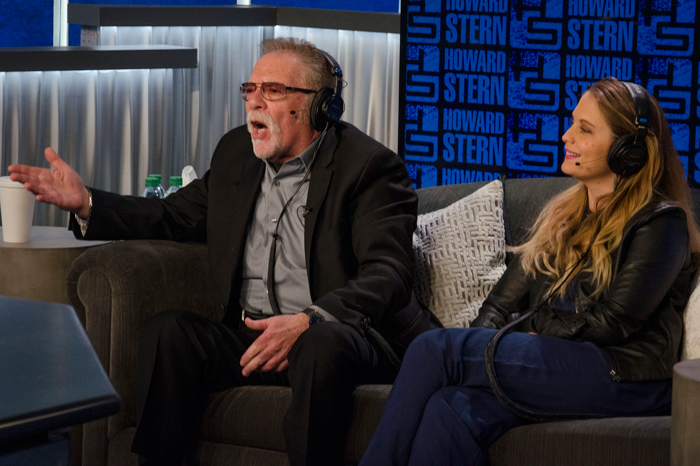 So why haven’t they walked down the aisle yet, two years later?

“It’s not that I don’t want to. I’ve been finishing school,” Stephanie told Howard. She recently graduated from a demanding veterinary technician program which means she’ll have more time now to plan for their big day. It seems the biggest dispute she and Ronnie have about their wedding is where to do it and how many people to invite — Stephanie wants a 200-plus person reception while Ronnie would prefer to keep the guest list to a couple dozen of their closest friends and family.

“And fucking JD’s not invited because he’s uninvited now,” Ronnie said, still angry at not being able to attend his good friend JD Harmeyer’s upcoming nuptials.

Stephanie has a theory for why Ronnie might be dragging his feet on walking down the aisle with her: he doesn’t want to deliver any romantic vows in front of a crowd. “I really think he’s just afraid standing up in front of everybody and saying, like, heartfelt things. I think that’s what the deal is,” Stephanie explained.

“It might be true, I don’t know,” Ronnie replied.

Howard asked if Ronnie is ever romantic with Stephanie in private. “I get little I love you’s here and there,” she told him, but said it’s rare for Ronnie to ever express his love with words. Ronnie’s love language is a much more physical one, and she said he has no issue proving himself in that department. 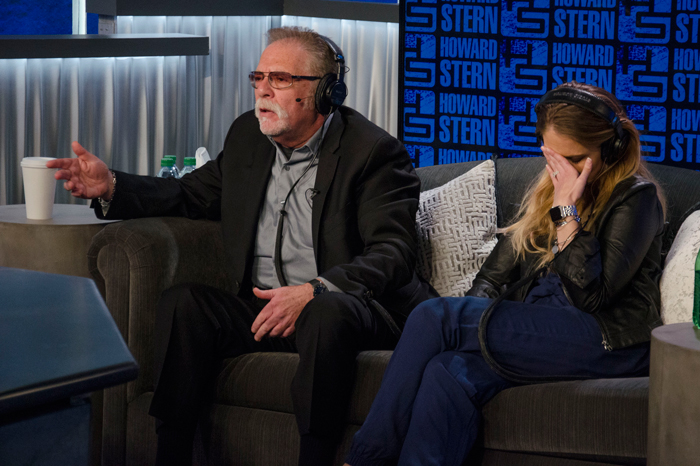 “Feels great to me!” Ronnie added.

“I know girls. They have their ways of just saying things to make a guy happy sometimes,” he told Howard. 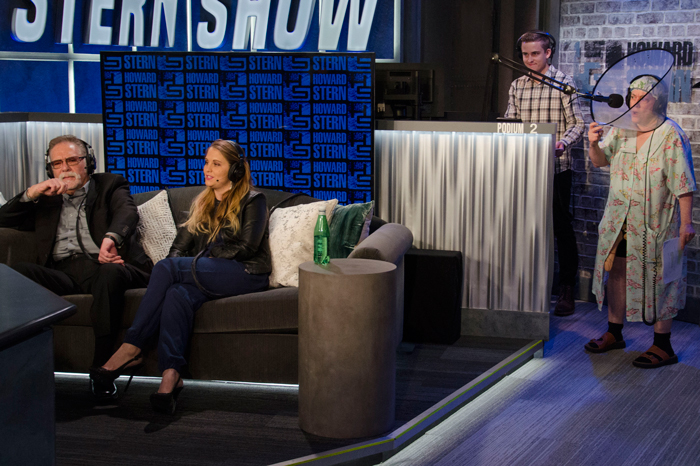 Speaking of sex toys, there was a large one sticking out of “Ronnie’s Mom’s” housecoat as she entered the studio on Tuesday to make her second in-person Stern Show appearance. Affixed around her neck was a protective cone to prevent her from “licking” herself, similar to something a dog wears after having surgery. This also marked the first time “Mrs. Mund” got to meet Stephanie face to face and she told her future daughter-in-law if she ever wanted to borrow a sex toy from her personal collection, she’d be happy to share.

“Welcome to the fucking family,” she excitedly told Stephanie. “If you ever need to borrow a dil’, I got a pile of ‘em.” 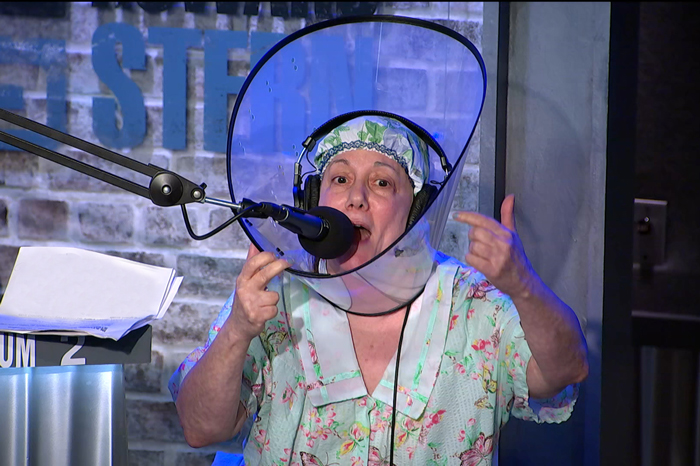 Also in studio on Tuesday was a panel of Stern Show staffers who know Ronnie best: Gary Dell’Abate, Chris Wilding, JD Harmeyer, Sal Governale, and Shuli Egar, who recently accompanied Ronnie and Stephanie on their trip to the Daytona 500. After seeing the couple interact with each other for a full week, Shuli offered a few opinions on Ronnie and Stephanie’s relationship but Ronnie didn’t want to hear anything he had to say.

“Dude, you’re no relationship expert. Please, let’s not go there,” Ronnie told him.

Shuli was set off by Ronnie insinuating he had damaging info about him, but Ronnie insisted Shuli was overreacting. 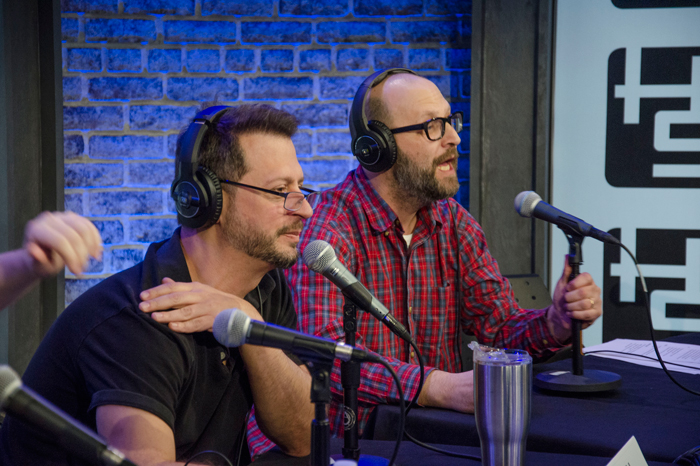 “You have issues, dude,” Ronnie told him.

“Yeah, you’re my fucking issue, opening your mouth and saying shit that isn’t accurate,” Shuli fired back before Ronnie stormed out of the studio.

After spending a few minutes out in the hall, Ronnie collected himself and returned to take his seat back on the couch next to his fiancée. As frustrating as it might be for him to hear his co-workers talk about him and his love life, Ronnie was a good sport and remained relatively calm throughout the rest of the segment as he listened to a few other opinions from the panel.

“No shit, Stephanie,” Sal Governale said with a laugh.