When Medicated Pete was originally scheduled to come in for Tuesday’s Stern Show, he was supposed to be with his new girlfriend. Those plans changed, however, after the Wack Packer revealed they’d recently broken up. Pete still stopped by this morning and tried to tell Howard what went wrong between them.

According to Pete, he met this girl while out at a bar that his friend’s band was playing at. Though he describes himself as being “socially awkward,” Pete claimed to have a good conversation with her that night. So good, in fact, he managed to score her digits without even asking for them.

“All of a sudden she gives me her number and I’m like, ‘Is this really happening? I don’t think that usually happens,’” Pete recalled.

He worried the phone number might be a fake, but when he called it the next day his dream girl did indeed pick up. They set up another night to have an official first date and before long Pete and the girl began seeing each other on a regular basis. But when he asked her to come with him to the Stern Show, that’s when things took an abrupt turn for the worse culminating with her breaking up with him in a text message.

“It just stalled out, basically,” Pete explained. “We never got to the point of knowing what was going on between us … we didn’t know if we could take it to the next level or not.”

Pete told Howard there was no sexual issues between him and the girlfriend and suggested she was completely satisfied. As Pete has proven in previous Stern Show appearances, he was blessed with an above-average sized penis which didn’t go unnoticed by his ex.

“I think she was impressed,” Pete said with a smile. “She didn’t tell me but I can probably tell … from her expression.”

Someone else impressed by Pete’s manhood is Stern Show staffer JD Harmeyer. He admitted on Tuesday to being jealous of the Wack Packer’s endowment. “I can’t get it out of my mind for some reason,” JD said with a laugh. 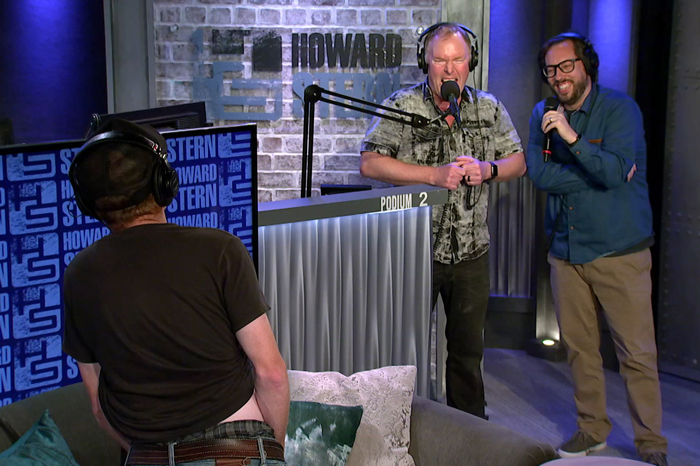 Adult movies might not be in Pete’s future but he just recently appeared in a new horror comedy film. “It’s called ‘Halloweed Night,’” he told Howard. “My character escaped from an insane asylum.”

Co-starring with him in “Halloweed Night” are the Stern Show’s own Sal Governale and Richard Christy who play gay lovers in the film. They were on set the day Pete was due to shoot his one scene in the movie but when Pete showed up, he had no idea what any of his lines were.

“They were literally getting ready to film him and I go, ‘Pete, your scene is great,’ because I read the script. And he goes, ‘Oh, it is?’” Richard told Howard.

Pete wound up ad-libbing his lines and he’s confident what he came up with on the spot is funnier than anything that was on the page.

“I like the acting thing,” he told Howard. “If I can get more roles here and there that’d be cool.”

If Pete’s acting career doesn’t get off the ground, perhaps his singing career will. He debuted a new track on Tuesday that he recorded with Adam Barta and producer Electropoint, who also worked with Tan Mom on her hit songs. Pete’s single is called “In My Opinion,” the lyrics of which deal with him overcoming his Tourette Syndrome. Take a listen to the audio (below).

Howard wondered if maybe Tan Mom was upset to see another Wack Packer recording music with her usual producer.

“Maybe there’s a little jealousy there. She didn’t say anything but I can sense that,” Pete said, adding he hasn’t even been in contact with Tan Mom recently so he had no way of knowing how she felt about him working with Barta.

“Maybe I’m wrong, I mean, who knows … I just get that sense,” Pete concluded.