Make no mistake – Sammy Hagar and the Circle are their own band with their own style, their own songs, and their own new album “Space Between,” available for preorder now. But with all four members in the Circle having a history with other headlining acts, Howard had a lot of questions to ask the guys when they stopped by Tuesday morning.

Sammy and bassist Michael Anthony have about 40 years combined of being in Van Halen to draw upon while drummer Jason Bonham has rock music in his blood as the son of late Led Zeppelin member John Bonham. Guitarist Vic Johnson has been playing with Sammy for over a decade and was once in the band the BusBoys, best known for appearing in Eddie Murphy’s 1982 movie “48 Hrs.” 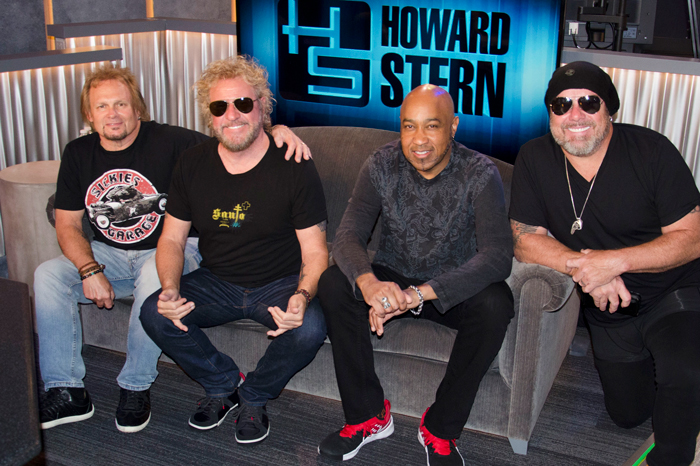 Their successful pasts influence their present set lists, with the guys playing songs from Van Halen, Zeppelin, and the music of other rock bands, as well as their new original offerings.

Sharing the spotlight is not a new principle for Sammy who, despite being a born frontman, told Howard he’s happy to let the talent of others shine through, including on his tour with David Lee Roth in the early 2000s. Diamond Dave sang lead vocals for Van Halen before Sammy replaced him in 1985 but according to Sammy, David turned down his invitation to sing with him on stage during the entirety of their tour. Rumors abound that the two rock stars still have it in for each other but Sammy told Howard it’s not the case.

“I don’t hate David. He’s an entertaining motherfucker,” Sammy said. “I actually like the guy.”

As for Eddie and Alex Van Halen, Sammy holds no animosity toward them either and talked fondly about the night he and Eddie wrote “Finish What Ya Started” together at 2 a.m. back when they used to live next to one another in Malibu, Calif.

“Chemistry’s a weird thing,” Sammy said of his unique connection with Eddie. “We wrote great songs.”

The Circle then treated Howard and Robin to a live performance of “Finish What Ya Started” live in the studio (above).

For all the success Van Halen had at scoring hit singles, the band didn’t get their first No. 1 album until 1986’s “5150,” the first featuring Sammy as lead singer and the album “Why Can’t This Be Love” appears on. As the leadoff single, that track helped propel “5150” to success no one could have anticipated, except for maybe record exec Mo Ostin. Sammy can still remember the day Ostin dropped by the studio to hear “Why Can’t This Be Love” for the first time, supposedly telling the room he could “smell money” while listening to the tune.

The Circle is hoping their new song “Can’t Hang” has a similar smell. The track, which Howard debuted live on the Stern Show Tuesday, is inspired by John Bonham’s drum beat on Led Zeppelin’s classic “When the Levee Breaks.” With Jason inheriting much of his father’s playing technique, recreating that sound wasn’t hard. But long ago, Jason learned he also inherited a similar struggle with substance abuse that his father dealt with and ultimately died from when he was just 32.

Jason told Howard his relationship with drugs and alcohol (which started in his teenage years) led many to compare him to John, something he took as a compliment at the time. With 17 years of sobriety under his belt now, he realizes a better compliment to receive back then would have been a comparison to his father’s playing abilities.

“I should have been working on the other side of the craft and been more focused on the drumming,” Jason said.

That’s not to say Jason wasn’t musically gifted at a very young age. At just 5 years old, he was already showing off his drum skills for the likes of Jeff Beck, Bad Company, and Paul McCartney. The audience member that always mattered most to Jason, though, was his dad whom he said he aimed to impress whenever he sat behind a drum kit.

It’s a similar feeling that comes over him now, playing with Sammy Hagar and the Circle. “When I play with Sam and these guys, I look to them as father figures,” Jason admitted. “It’s always nice to play with guys that I look up to like that … I’m always looking to impress them.”

When Led Zeppelin received Kennedy Center Honors in 2016, Jason was hoping to both impress and surprise the surviving members of the band, Robert Plant, Jimmy Page, and John Paul Jones. As Ann and Nancy Wilson took the stage to perform “Stairway to Heaven,” Jason soon followed and took his spot behind the drums just as the song’s upbeat tempo kicks in. The moment brought tears to Plant’s eyes, who in 2017 told Howard it was the sight of Jason that caused him to be overcome with emotion.

“I surprised them. That’s why there was such a reaction,” Jason told Howard on Tuesday. “They didn’t know I was gonna be there.”

Many believed it was a sign Led Zeppelin was about to reunite for their first official tour since John’s death in 1980. Even Jason was curious if the band would get back together again and if he’d be a part of it. But when he inquired if Plant had any intentions of doing so, the frontman told him he’d rather leave things as they were since it would be impossible to capture what they had done in the past.

As for any plans for a Van Halen tour, Michael disclosed some recent developments from just last year.

Howard assumed Michael would only agree to go out on the road again if it was Sammy behind the mic. Hagar interjected, saying he’d have no problem if David Lee Roth was a part of the reunion tour instead of him.

“I told Mike, if that happens, if they want to go out with Dave again, I don’t care,” Sammy said with a smile. “I’ll go down to Cabo for the summer!”

To preorder Sammy Hagar and the Circle’s new album “Space Between,” click here.