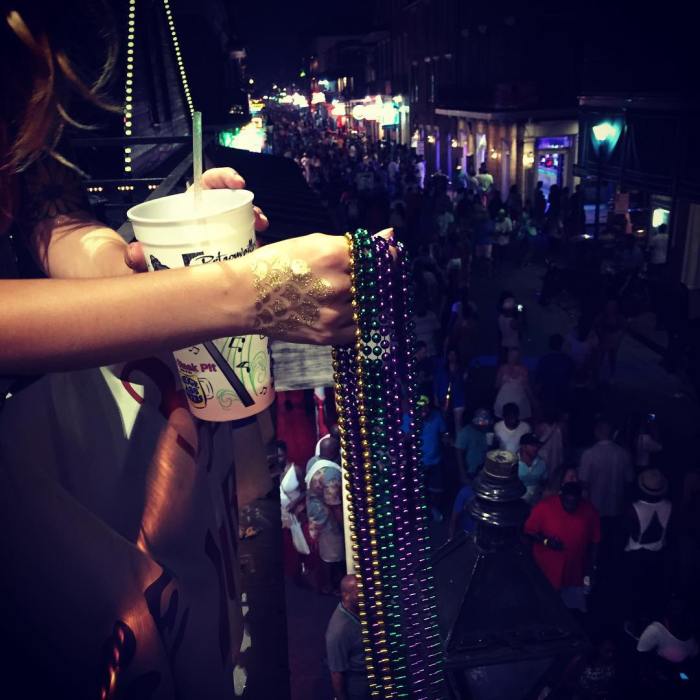 Stern Show Producer JD Harmeyer in his the first long term relationship of his 33-year life and just took a vacation to New Orleans with his lucky lady. We asked JD to document the trip for fans and despite initial hesitation about the locale, it turns out he had a great time! Check out his experience below.

I’m not a vacation person. Like Howard, I love being home — as long as I’m with my TV, X-Box, PS4, and computer, I’m good. Sure seeing other places could be cool, but that requires me to travel … away from my home. Then I got a girlfriend and of course she’s the complete opposite of me and actually wants to leave the house and go places. She told me about going to New Orleans and how much she loved it. I decided okay, lets go there. And because I can’t just vacation to vacation, I took notes of some of the places I saw, stayed in, and ate at for this blog.

First of all, New Orleans is great. If you sweat easily like me though, be prepared. Especially if you go there during the summer.

And tourist tip: don’t pronounce it “New or LEANS” or you will get the look of shame at you. Either say “New Orlins” or “Nawlins.”

We stayed at two places: First we stayed at Harrah’s which is a little ways away from the French Quarter, also a short walk to the water. Great hotel. If you’re a gambler like I can be (on occasion), the casino is beautiful. In fact I was up about $100 playing Blackjack by myself at a table. I was winning almost every hand. Then three people sat down at the table and played and I lost my profits immediately. I got right up. Still pissed about that.

Then we stayed at the Hotel St. Marie which is a little hotel off of Bourbon St. Obviously not as big or grand as Harrah’s, but still nice and has a nice pool in the back.

I’m not a huge drinker but when in Rome…

My favorite drink was The Hurricane. Don’t ask me what it’s made of but it looks like Fruit Punch and is delicious. And if you get one at Pat O’Briens in the big glass, try to pace yourself like I should have done. Otherwise you’ll be drunk by noon … which may actually be what some of you want. 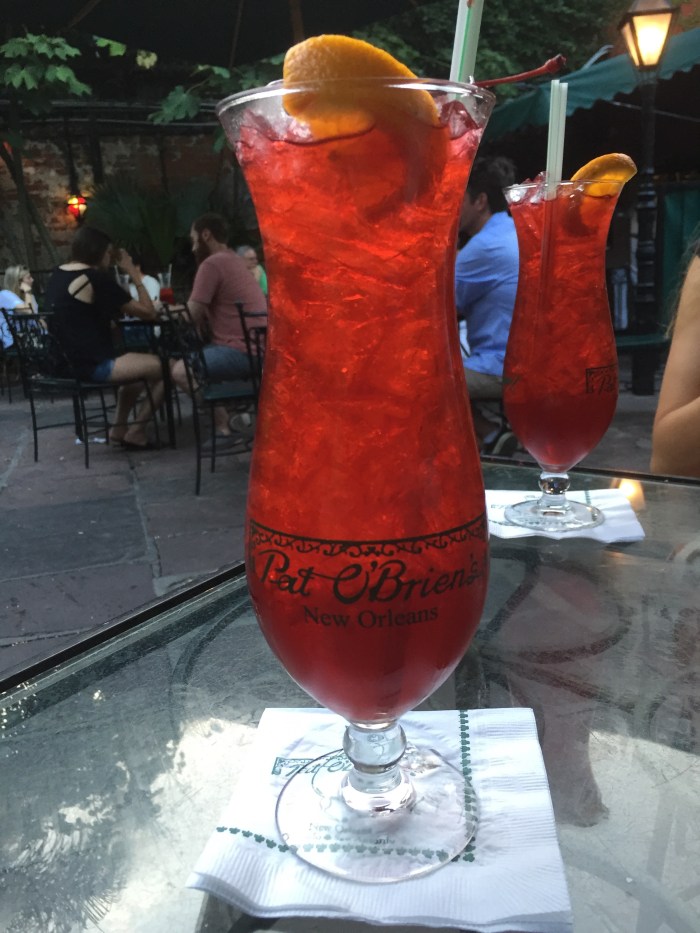 The Hand Grenade is another famous drink that comes from the Tropical Isle bars. I liked it ok, but might have been a little too tarty for my liking. But it comes in pretty cool cups. 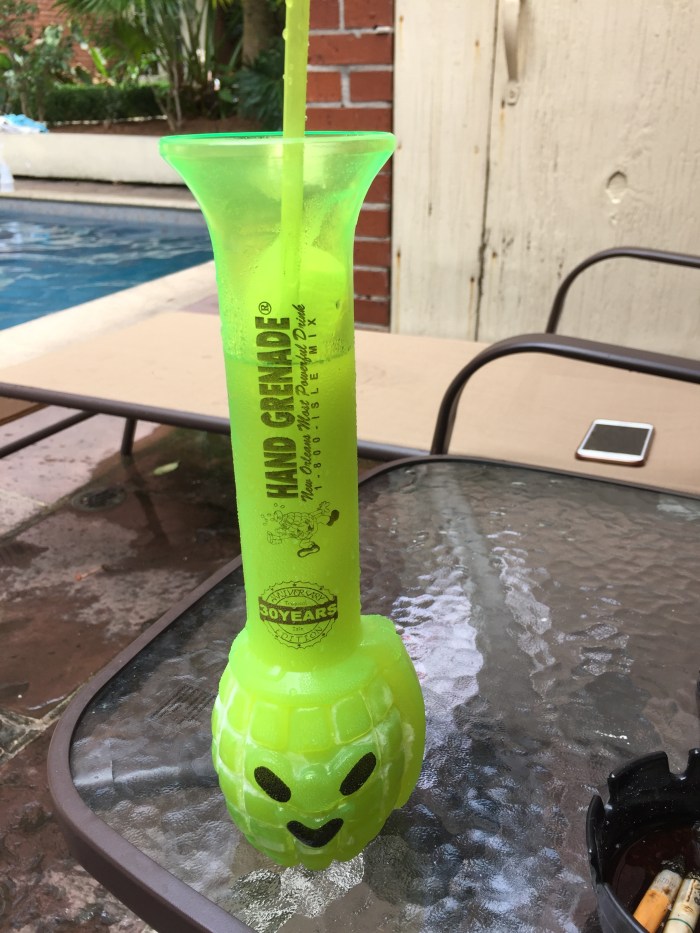 My girlfriend hates that I mainly drink Bud Light or Coors Light for beer, so she was very excited to see I liked a local beer called Abita Amber. I’m no expert on beer like Richard Christy so I can’t tell you what exactly is good about it. It just tasted good. So there.

I also had a drink called a Resurrection that’s from a bar called Spirits on Bourbon. My girlfriend got me hooked on the show “Bar Rescue” (which I’ll never forgive her for) and Spirits was one of the bars that was “rescued,” so of course we had to go check it out. I liked the Resurrection a lot and also has a cool cup with flashing lights.

We also went to Lafitte Blacksmith which is supposedly the oldest, or one of the oldest bars in America. Maybe the world. I don’t know. But it was a nice place to check out and drink.

If you’ve seen me the past couple years, you can see I like food (Fuck you, Will). New Orleans is filled with great food. I’ve never had jambalaya or gumbo before, and I liked them both a lot. You can get great gumbo at The Gumbo Shop. But they also have Alligator Sausage which was delicious. 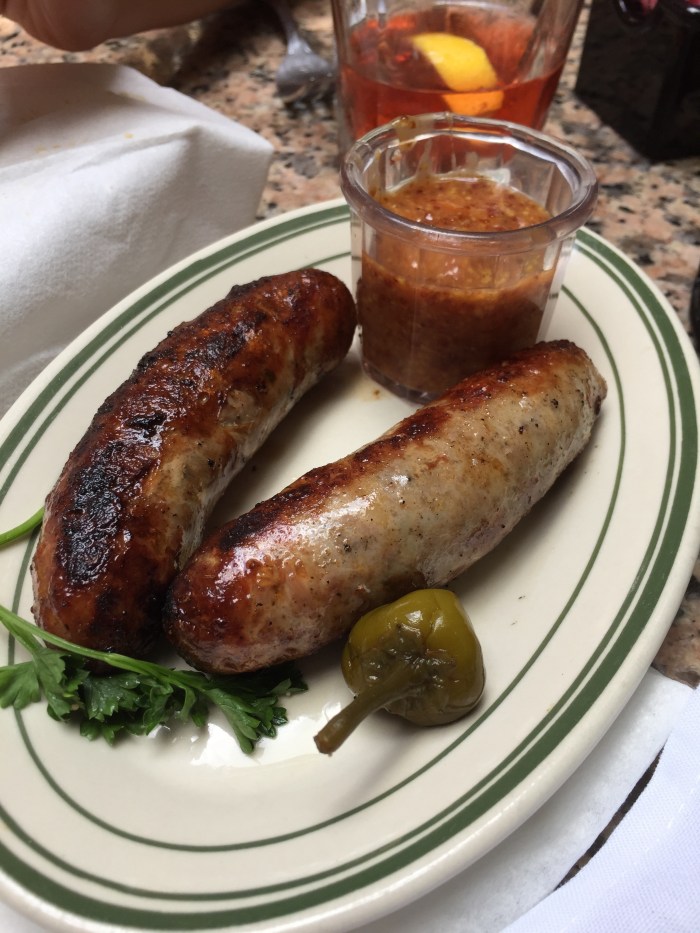 Beignets are also a big thing in New Orleans. My girlfriend loves them. I like them ok. We went to both Cafe Beignet and Cafe Du Monde. Both places are good with their Beignets. 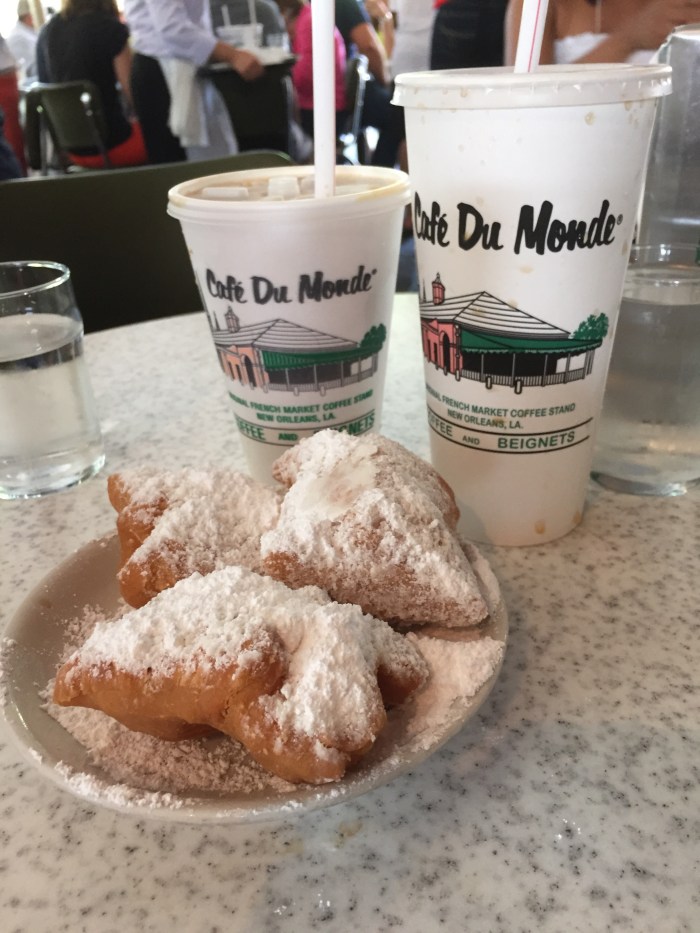 One of the places we went was kind of a fancy place called Commanders Palace. Great atmosphere and food. My Tournedos of Black Angus Beef was amazing. And also try the Crawfish Boil Beignets. Also amazing.

Some other places that were great were the Royal House Oyster Bar, Cochon, Barcadia, and Mannings which is a great place to eat and watch sports. 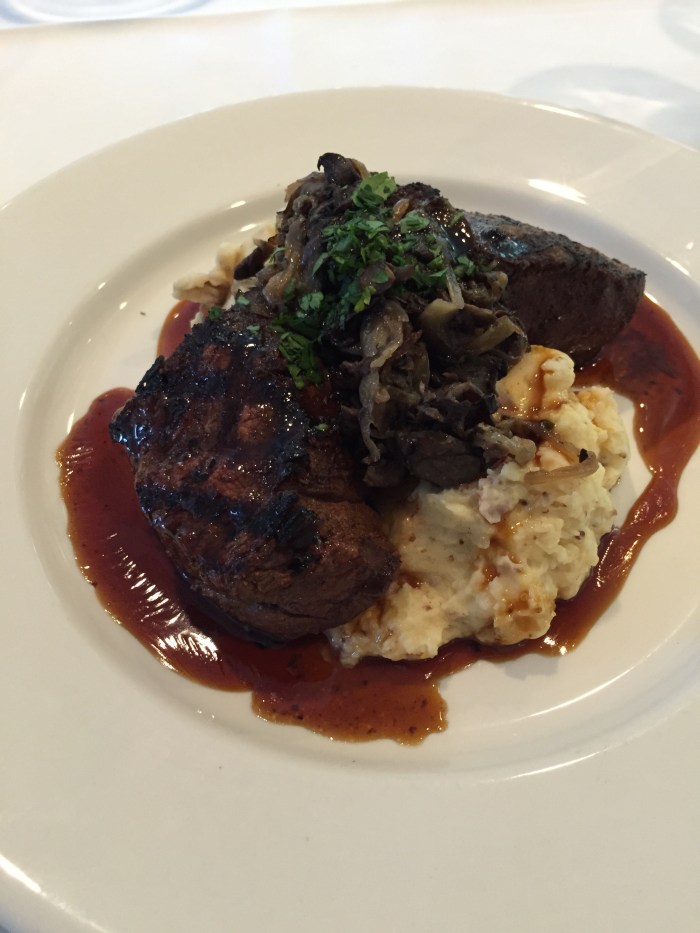 But there was one place I loved the most. We ate there twice — a place called Coops. It’s not the fanciest place by any means. I told my waiter I wanted the oyster/shrimp combo. He flat out said, “No. I’m not taking that order.” He said I could order that at Red Lobster (by the way I love Red Lobster but I didn’t dare say that). My girlfriend said they were famous for their fried chicken so I got that. It was/is some of the best fried chicken I’ve ever had. So good. So thank you to that man for talking me out of it. Also, they have a duck quesadilla … Jesus Christ, probably the best thing I tasted the whole trip. 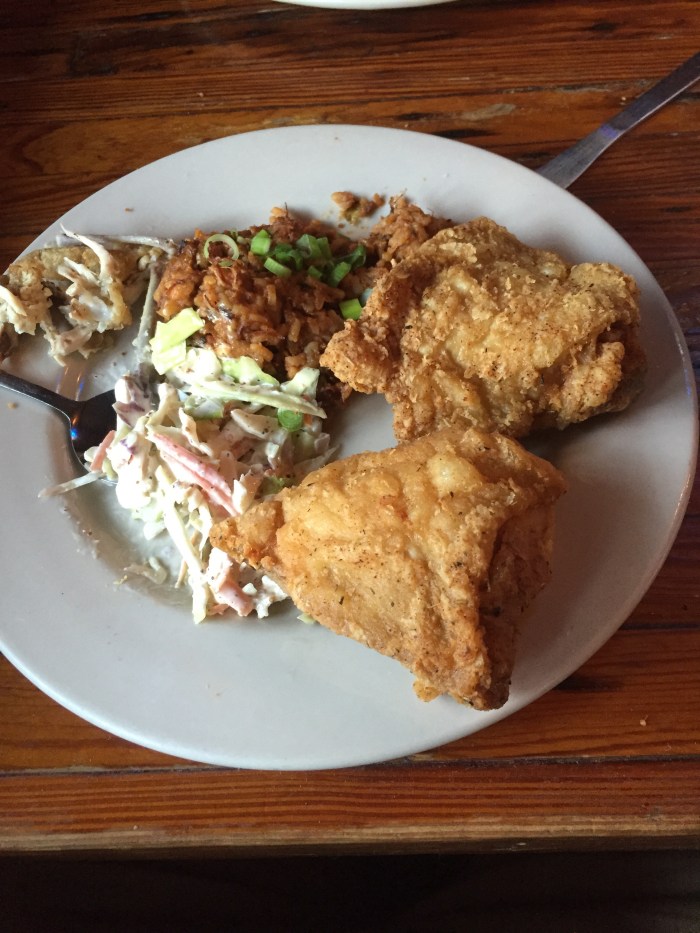 Of course we walked up and down Bourbon Street at various times. It’s a different sight every time. A great place to people watch, especially if you’re at a bar or hotel that has a deck that you can look down at it.

My girlfriend wanted to go to the New Orleans School of Cooking. I have no idea how to cook but it was cool to watch. Chef Kevin is a funny guy, personable. You get to eat what you watch him make and the man knows how to cook as well. He made some great gumbo and jambalaya.

New Orleans is also famous for the music. When you walk down Bourbon Street, you’re hearing live music from just about every bar thats on the street.

There’s one place though called Preservation Hall. I’ve never heard of it. I’m not a music expert so forgive me if you are and think I’m a douchebag for not knowing about it. You do have to wait in line for about an hour to get in, let alone have a seat. They usher you into a small intimate room. A guy tells you no pictures are allowed, no cell phone use at all or the band stops. And then a small jazz band comes in and plays for your group for about an hour. It was a really nice experience. Great music. Shannon Powell, a jazz drummer known as “The King of Treme,” was the band leader and it was just great to watch.

After Preservation Hall, we went to a bar called Fritzels and watched their jazz band play. The drummer for that group was cool too. Making everything look easy.

So that was basically my trip in a small nutshell. I certainly didn’t see everything, eat everything, or drink everything New Orleans had to offer. But what I did do of those was great and I’m sure I’ll be back some time to do more. And I definitely recommend it as a place to go visit and experience.