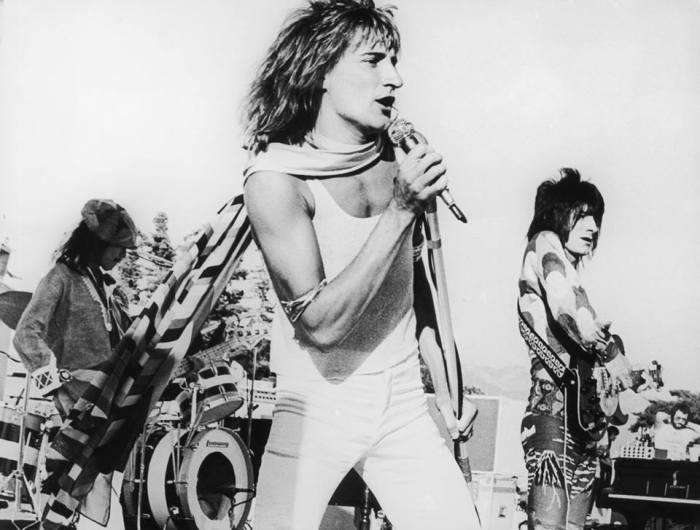 Rod Stewart may be an international superstar today, but some of his best work could have been exclusively played down at a local pub for seven rowdy Brits. We speak, of course, of the Faces, the band in which Rod Stewart served as lead singer from 1970-1975. You’ve probably heard a Faces song in passing (it was “Stay With Me,” we’ll tell you right now) but maybe thought it was simply a Rod Stewart solo tune.

The case can easily be made that the Faces are among the greatest rock acts of all time, and one of the first rock “supergroups.” However, at their core, the Faces was merely the reconstruction of a broken-up Small Faces with half of the Jeff Beck Group. In January 1969, lead singer/guitarist Steve Marriott had left the Small Faces to form Humble Pie with Peter Frampton (another group which deserves your utmost attention). The remaining members – bassist Ronnie Lane, keyboardist Ian McLagan, and drummer Kenney Jones – hooked up with Jeff Beck Group bassist Ronnie Wood (switching to guitar), who brought along his mate, Jeff Beck Group singer Rod Stewart. The result was a swagger unmatched by anyone this side of the “Get Yer Ya-Ya’s Out”-era Stones.

Through their four studio albums, one live album, and several non-LP tracks, the Faces make one hell of a case that the boozy, good-time band should be much higher on the totem pole of rock royalty. (Not that they’d care either way.) Sure, they were inducted into the Rock & Roll Hall of Fame (with the Small Faces) in 2012, but still, the fact that they’re not regularly mentioned with the Who, the Stones, Zeppelin, etc. makes less sense the more Faces music you hear.

At the same time, the Faces never took themselves all that seriously – a breath of fresh air in a time when prog rock was becoming a thing, the concept album-era had achieved full bloom, and rock music was considered “art.” The Faces were aggressively unpretentious. They knew that rock & roll should be fun (they kept a fully stocked bar on stage during every show, for crying out loud) and as a result, any Faces album acts as an instant playlist for any party worth crashing. Simply put, the Faces kick ass.

Here are a few reasons the Faces should be your new favorite band.

The Faces strut n’ swagger at its finest. The lead track off their 2nd album, “Long Player,” might as well be the band’s mission statement. All the elements are working in conjunction with one another, adding up to a symphony of unfiltered groove. Kenney Jones can be forgiven for his misguided ‘stache in this clip, however.

Rod Stewart, ladies and gentleman. Rod’s vocals are as good as they’ve ever been on “Too Bad,” a fun, rollicking track off of the Faces best album, “A Nod Is As Good As A Wink…To A Blind Horse.” He really lets it rip right from the get go, and never lets up. “Too Bad” alone would make Rod a legend. Add in Ronnie Wood’s down-and-dirty guitar work throughout, and you’ve got a killer Stewart/Wood penned tune.

Okay, you’ve heard this one (at least if you’ve seen “Rushmore” or “Without a Paddle” recently). Written by Ronnie Lane and sung by Ronnie Wood (his only lead vocal on a Faces track), “Ooh La La” covers everything great about the Faces in a very atypical way. Great riff, great melody, wonderfully ragged vocals, and a sweet sense of humor underneath the surface. The tune was covered decades later by Rod as a tribute to the late Ronnie Lane.

The Faces appeared on several Rod Stewart solo tracks of the era, including this barn burning cover of the Temptations’ “(I Know) I’m Losing You.” Even if you’re not big on drum solos, you’ll be fixated on Kenney Jones’ showcase at the four-minute mark.

One of the best Faces tracks may also be one of the best rock ballads out there. “Debris” shows that the Faces had heart and soul to go along with that swagger. The main contributor there is bassist Ronnie Lane, whose homespun, folksier tunes gave the Faces another sharp tool to whip out every so often. There’s no better example of that then “Debris,” an ode to Lane’s father. You could argue that the best moment in the Faces catalogue is that Stewart/Lane harmony on the bridge of this tune.

By 1975, the band’s split was inevitable. Rod’s superstardom was already in full swing, with Ronnie Wood already beginning his forty year (and counting) gig with the Stones. Ronnie Lane had left the group in 1973 (and would be diagnosed with MS shortly after), and in 1978, Kenney Jones would replace Keith Moon in the Who. Ian McLagen became one of the most in-demand session and touring keyboardists in rock, additionally curating the band’s legacy until his untimely death last year. Regardless, the Faces’ music remains timeless, and ripe for rediscovery. Rod, Woody and Kenney even reunited for a charity gig in September, 2015, with talk of further gigs down the line.

For a more in-depth look at the Faces, pick up their definitive box set, “Five Guys Walk Into A Bar,” which collects hits, rarities, and live cuts together in a seamless portrait of the group. According to AllMusic, “there has never been a better box set” than “Five Guys.”

Check out Rod Stewart’s new album “Another Country,” out now!