“I think if you’re a really good cop, you’ll probably agree with what I said,” the director tells Howard Stern

The mouthpieces of several police forces around the country may be calling for a boycott of Quentin Tarantino and his new film “The Hateful Eight,” but that isn’t stopping the director from standing by his words.

“I had every right to say what I said,” Tarantino told Howard Wednesday morning, explaining why he still doesn’t take back the comments he made at an October rally protesting police brutality.

“I wasn’t cavalier,” Tarantino said. “I have a lot of cop fans. I think I have established what I said. I think if you’re a really good cop, you’ll probably agree with what I said.”

According to Tarantino, he was invited to attend the RiseUpOctober event and chose to do so after growing tired of seeing several “unarmed people being shot and killed” by law enforcement officers around the country.

Police unions in New York, Los Angeles, Chicago, and Philadelphia have all called for boycotts of Quentin’s movies, but so far the only people lining up outside of “The Hateful Eight” premieres are his supporters.

Tarantino did, however, take flak from someone on national television: his estranged father. Appearing on Fox News’ “Hannity,” Tony Tarantino spoke to Sean Hannity about his son’s remarks and told him Quentin was wrong for saying what he did.

Hannity asked the elder Tarantino if he had expressed those sentiments to Quentin, apparently not realizing he had abandoned his son at the age of two.

“Surprisingly at Thanksgiving he didn’t bring it up!” Quentin joked to Howard.

With “Hateful Eight” hitting theaters nationwide on Dec. 25, there’s one person probably happier than Quentin to see this film actually get released: Samuel L. Jackson. The oft co-star of Tarantino’s movies, Jackson was excited about his part in “Hateful Eight.” But after the script was leaked onto the Internet, Tarantino considered not doing the movie at all.

Quentin says Jackson reacted to that news by saying, “That motherfucker better get over it!”

He is unsure still how exactly the early draft got out, but Quentin assumes that one of the 12 people he shared the script with showed it to their agent, which lead to more people reading it than Tarantino intended.

“It kicked me in the shins in a very delicate part of the creative process,” Quentin told Howard.

One of the eight hate-filled individuals starring in Quentin’s new flick is actor Kurt Russell. Tarantino traveled to Texas to meet with him and his long-time partner Goldie Hawn before production on the movie started. The three decided to meet at a bar, so Quentin went early to make sure they got a good table. 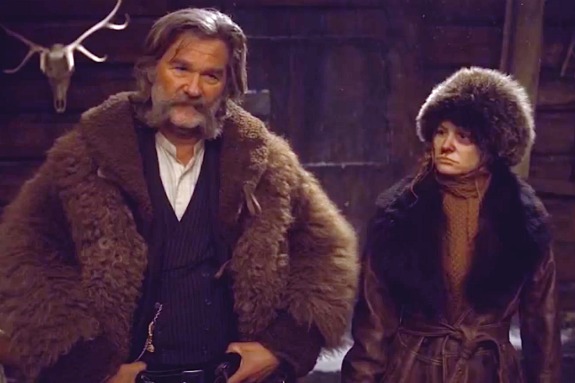 “I show up, a UT football game is on that night, so the place is just jam packed with orange yahoos, rooting on the Longhorns,” Tarantino said. While he feared Goldie wouldn’t want to stick around at a place like that, Quentin says she was more than willing to hang out with some of the local folk.

Quentin’s focus is currently on the release of his new movie, but he filled Howard in on some potential projects down the line, TV being one of them. While he admitted he has no interest in creating a television series, he does like the sound of doing a 5-episode special. Tarantino is very particular on who in television he’s willing to be in business with, though.

“I wouldn’t do it for Netflix,” Quentin said. “I’d do it for HBO or Showtime. I don’t want you to have to stream something through a computer in order to watch my stuff.”

Quentin also called out Disney and “Star Wars” this morning for what he considers to be “extortion.” Check out what he said about the highly anticipated blockbuster and listen to clips from his interview on the Stern Show below.