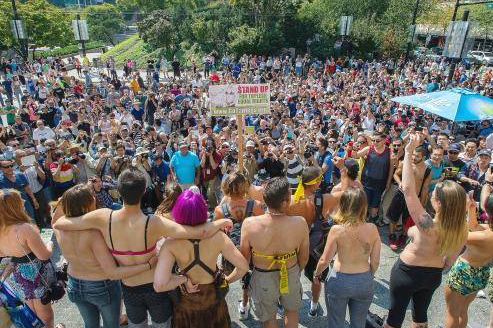 New York City’s Go Topless Day is usually held on the Sunday closest to Women’s Equality Day. It was created by the members of the Raelian Movement as a day of peace and celebration. According to the press release, the goal is to promote the ideas that “there must be absolute equality between men and women” and “exclusive male rule created major planetary imbalances that could prove fatal to society.”

Sunday’s 9th Annual Go Topless day featured a parade on West 58th street of topless women (and some men), but according to Gothamist a significant portion of the gathered crowd was actually leering male gawkers. “There were just men with cameras and iPhones all chasing after the topless ladies like they had never seen a woman’s breasts in their entire lives,” photographer Gretchen Robinette said.

“I watched a mother and her 3 children, not involved with the parade, nearly get trampled just trying to cross the street because the men were flocking from all over to shoot breasts,” Robinette added.

Additional violence reportedly broke out after one topless marcher spit on a male gawker who made an inappropriate comment… and the man punched her in the neck. This is why we can’t have nice things.