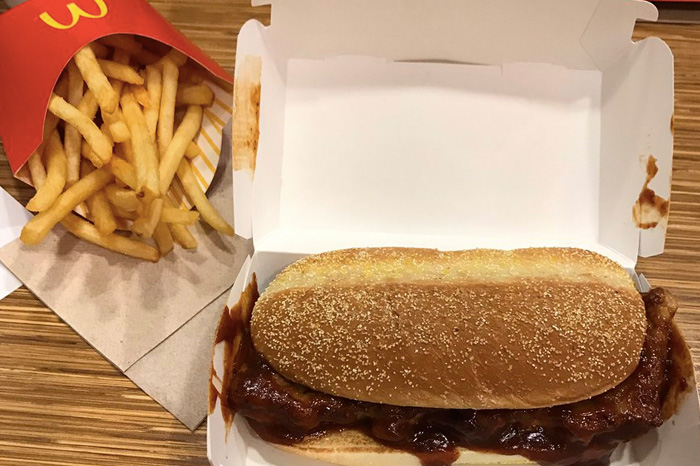 Yes, The McRib is back and don’t think the internet hasn’t noticed. Pictures of the fast food restaurant’s seasonal barbecue sauce-slathered pork sandwich started springing up all over Twitter earlier this week.

So, how did the Stern Show staff’s biggest fast food fans take the news? “Fast Food Maniac” author Jon Hein said the McRib’s return is something “special,” adding that the sandwich “tops the Shamrock Shake as the best McDonald’s LTO (Limited Time Only) option of all time.”

JD Harmeyer, on the other hand, has gone quite a few years without indulging. “I liked them as a kid,” he said. “But haven’t had one in a long time.”

And here’s how social media reacted:

The world may be ending but at least the McRib is back pic.twitter.com/w4EaB5kg0f

The signs were there all the long…. Trump is winning and the McRib is back. Coincidence? I think not pic.twitter.com/KRFPc0IvIB

I was worried about the election until I heard the MCRIB IS BACK ‼️‼️‼️@McDonalds pic.twitter.com/nAMqGZlYwa

According to reports, the McRib will only be available for a limited amount of time. So, click here to find out where you can grab one and click here for McDonald’s opinion on which of its sides pair nicely with the sandwich.