“That guy should just marry that woman and be done with it,” CNN newsman says of reality series contestant 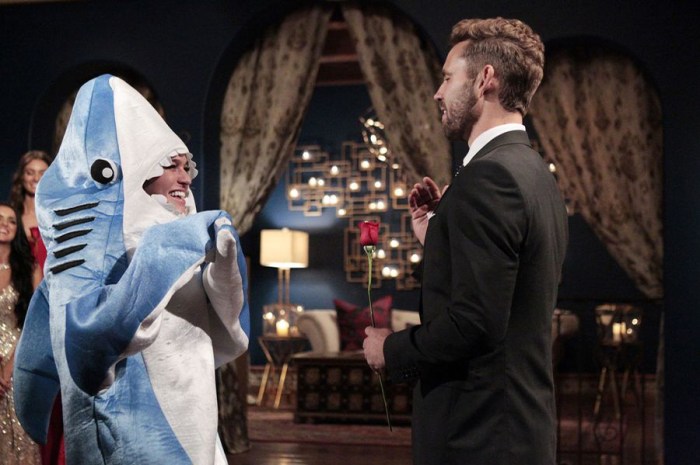 The big debate after the Season 21 premiere of “The Bachelor” on Monday night isn’t which girl Nick Viall will choose as his wife but rather whether 23-year-old contestant Alexis was dressed up as a dolphin or a shark. Stern Show guest Anderson Cooper knows the answer, but couldn’t help but laugh while watching clips from the ABC reality series.

“She’s got shark gills, got shark teeth, she’s a shark,” Anderson said on his CNN show. “I’ve been swimming with sharks, I know a shark when I see it.” Alexis, however, insisted throughout the episode that she was indeed a dolphin, at one point even wading around in a pool and making dolphin calls at her potential suitor.

Later in the segment, Anderson had a hard time reading some of the jokes written for him by his staff. “Madam, if you are in fact a dolphin … I’m not going to say that,” Anderson said with a laugh after seeing his next line appear in the teleprompter. “The writer of this segment wanted me to ask ‘where is your blowhole?'”

But whether or not Alexis should get a rose was a no-brainer for Anderson.

“That guy should just marry that woman and be done with it,” he said while looking at her supposed dolphin costume. “You have to admit, she came in there with a real sense of porpoise.”

On Wednesday’s Stern Show, Howard told Robin he already knew who would win the final rose this season: the girl who admitted none of her friends wanted her to be on “The Bachelor.”

“You can say who should win, but that’s not who will win,” JD Harmeyer said, himself an avid “Bachelor” watcher. “I can’t believe I’m talking about this.”

.@andersoncooper refuses to say the word “blowhole” (at first) as he takes on @TheBachelorTV on #TheRidiculist https://t.co/XcUn3WnghJ