Photos: The World Lets It All Hang Out for No Pants Subway Ride 2017 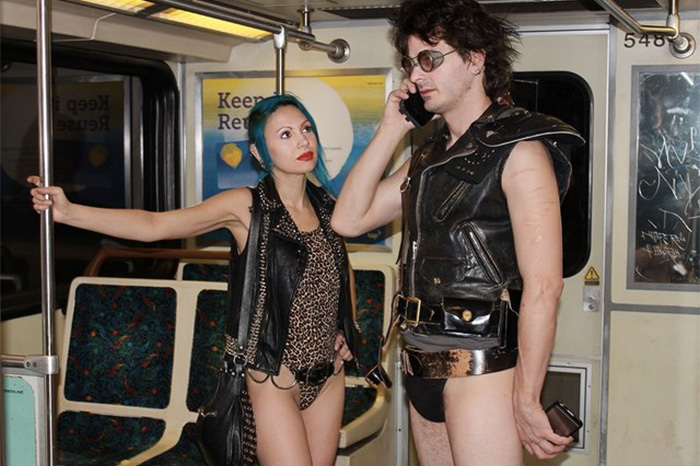 This weekend, Americans gave new meaning to the phrase “the land of the free” as they let it all hang out during the annual No Pants Subway Ride.

Originated by New York City’s Improv Everywhere comedy collective in 2002, the pants-free event was reportedly created in order to give Gothamites a reprieve from otherwise dull commutes. Since then, the annual event has spread from coast to coast, infecting cities like Boston, Chicago, Philadelphia, and Los Angeles with the pants-free spirit. This year, there were even participants in international cities like Prague, Berlin, and Toronto.

As usual, riders got creative with the concept. Some participants wore suits from the waist up, while others flaunted neon and undies and furry boots as if they were headed to a rave. New York’s WABC 7 spoke to one participant, Peter Saez, partaking for the third time: “People who don’t understand what we’re doing will look at us like we’re doing something bad or wrong,” he told WABC. “It’s just for fun. It’s a fun trip, that’s all.”

Check out photos from the 2017 No Pants Subway Ride (below).

Photos: The No Pants Subway Ride Arrives In Santa Monica For The First Time https://t.co/GXge3Flc1u pic.twitter.com/r6b8tD0Far

A rider had fun acting like a polar bear on the subway train – from 2017 Toronto No Pants Subway Ride on January 8th pic.twitter.com/SrJdEwxDEZ

Photos From The 2017 No Pants Subway Ride Around The World https://t.co/YA5YL2UpIg pic.twitter.com/aCtiVKDrXQ

Just for fun! Boarding subway in #Berlin with no pants on, are you game for this? #NoPantsSubwayRide pic.twitter.com/UlCiZdJuMZ

Today was the annual “No Pants Subway Ride.” Here’s a preview of pics from NYC #NoPantsSubwayRide pic.twitter.com/nPGeN4cmu2

Everything you need to know about this Sunday’s No Pants Subway Ride: https://t.co/nU0AjIpro5 pic.twitter.com/RfUQbQwNkM