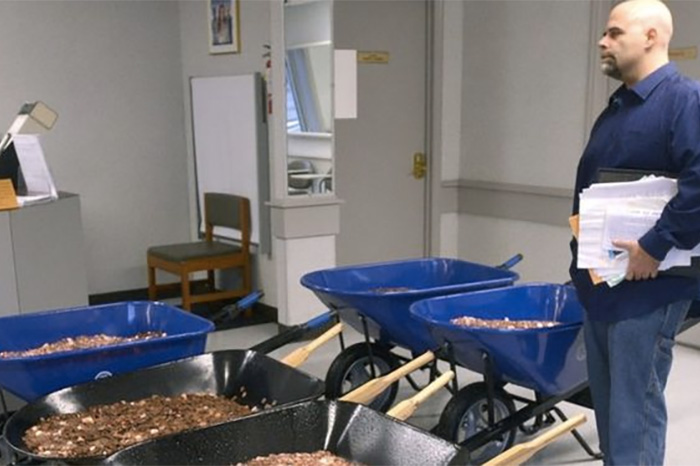 A Virginia man stuck it to the Department of Motor Vehicles this week by paying a nearly $3,000 sales tax with nothing but pennies.

It started back in September, when Nick Stafford had a question for the Lebanon, Va. DMV, which he couldn’t get answered because no one would give him a direct phone number. It ended when he pushed five wheelbarrows filled with 298,745 pennies—weighing 1,600 pounds—into their office Wednesday morning, leaving employees to work through the night and count them out by hand.

See, Nick was trying to get some information about the sales tax he owed on two new cars, but he didn’t want to wait in the DMV’s notoriously long lines to get an answer. When his calls kept getting re-routed, he filed a Freedom of Information Act request, petitioning the DMV for a direct number.

Nick got the number he wanted, but he said employees on the other line at first refused to answer his question. After repeated phone calls they eventually gave him the information he wanted, but by that point Nick had widened the scope of his inquiry—he wanted the phone numbers to 10 local DMVs. The Lebanon employees reportedly refused to give them out.

Nick filed two lawsuits against specific DMV employees and a third agains the DMV itself, according to reports, alleging they had violated a public records law. A judge dismissed the lawsuits this week and refused to hit the DMV or its employees with fines, but he did order the DMV to hand over the 10 numbers Nick wanted.

However, according to Nick, that was beside the point. “The phone numbers are irrelevant to me,” he told Richmond.com. “I don’t need them. I told the judge ‘I think I proved my point here.'”

That’s when Nick gathered up 298,745 pennies and wheeled them into the DMV. Between hiring help to gather his pennies and purchasing five wheelbarrows to house them, Nick spent an extra $1,000.

Nick shared the full story—and all 10 DMV phone numbers—on his personal website. Watch a Facebook video of the whole thing (below).