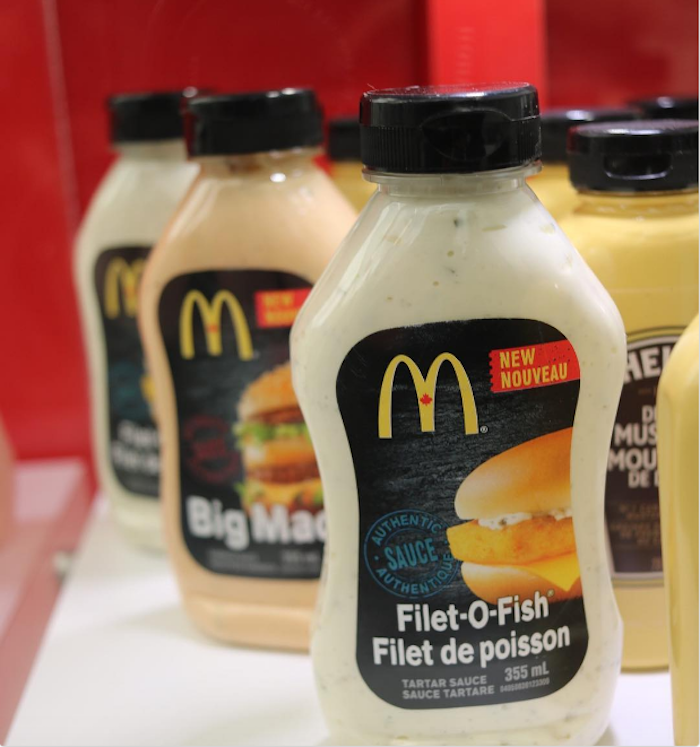 Recreating your favorite McDonald’s sandwiches at home can be a fool’s errand, especially when missing that one “special” ingredient. Fortunately, prospective amateur fast food chefs can now find a solution north of the border.

McDonald’s announced plans to bottle and sell its signature Big Mac, Filet-O-Fish, and McChicken sauces this spring in Canadian grocery stores. “With this launch, Canadians will now be able to experience the world famous sauces they love at home. This is part of our continued commitment to giving Canadians more ways to enjoy McDonald’s,” a spokesperson for the fast food chain said in a statement. “We look forward to sharing more details soon.”

The news of the special sauces first broke on social media after food blogger Diana Chan spotted them at the Grocery and Specialty Food West Show at the table for Kraft Heinz, who are partnering with McDonald’s in the sauce production. Chan posted a photo of the bottles on social media (above).

Earlier this year, McDonald’s released a few limited edition bottles of its Big Mac special sauce to select American fans, including the Stern Show’s own Jason Kaplan, who revealed he is very enthusiastic about the sauce’s wider release. “Being able to buy our favorite chain food restaurants goodies in a super market is the American Dream,” Jason told HowardStern.com. “Last night I had Nathan’s fries at home because my supermarket sells them. God Bless America.”

However, Jason took issue with the Canadian exclusivity of the venture: “Nothing is more American than McDonald’s. It must be some dumb marketing thing. You don’t need to do more marketing McDonald’s. My body is already 85 percent special sauce. You know we want it. Give it to us!”

Regardless, Jason maintains that the availability of the Big Mac sauce is truly something to cherish. “The Big Mac is what makes McDonald’s so special,” Jason said. “The whole package — two all beef patties, special sauce, lettuce, cheese, pickles, onions on a sesame seed bun — is the signature McDonald’s sandwich. You can get all the other ingredients elsewhere, but there is only one place to get the Special Sauce. Therefore, the Special Sauce is what makes McDonald’s so special, not just the burger.”

Stern Show staffer and fast food fiend Jon Hein disagrees. “I think this is a huge mistake,” Jon told HowardStern.com. “By putting all of these sauces out there, it devalues the experience of going to McDonald’s. Part of the appeal was that the Golden Arches was the only place you could get that kind of stuff. Keep customers coming to the stores — not going to their grocery shelves.”