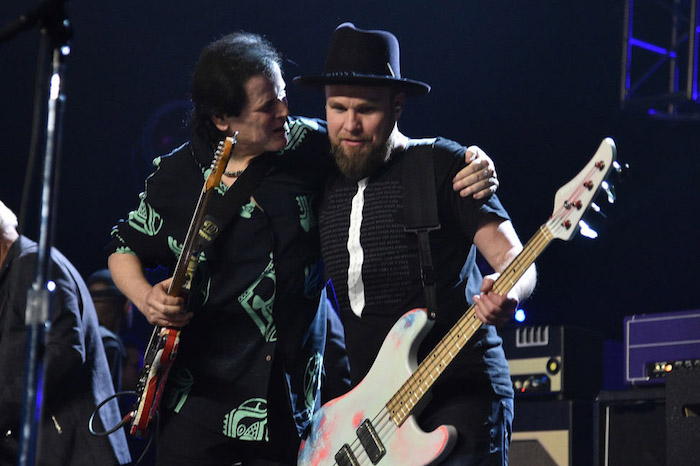 On Friday, Pearl Jam was one of the select acts honored for its career achievements with an induction into the Rock and Roll Hall of Fame. During the ceremony, bassist Jeff Ament took the opportunity to seemingly make a statement in support of those who have, over the years, not been honored.

The Pearl Jam member wore a t-shirt listing off many notable musical acts thus far been ignored by the Rock and Roll Hall of Fame. Among the groups and individuals listed are Brian Eno, the Cars, Harry Nilsson, Warren Zevon, Smashing Pumpkins, Bon Jovi, the Monkees, Billy Idol, and the Flaming Lips.

Pearl Jam showed support of Ament’s wardrobe statement by posting a close-up shot of the shirt on the band’s social media accounts, presenting a crystal-clear picture of many popular and groundbreaking acts that have yet to be recognized by the Hall. Take a look (below).

With the shirt, Ament is the latest musician to shine a spotlight on the Rock Hall’s practices, with fellow Hall-of-Fame member Steve Miller sounding off to Howard in May 2016. Of course, Howard’s longtime quest to get Cheap Trick inducted into the Rock Hall came to fruition in 2016, so there is hope for many of these acts yet.