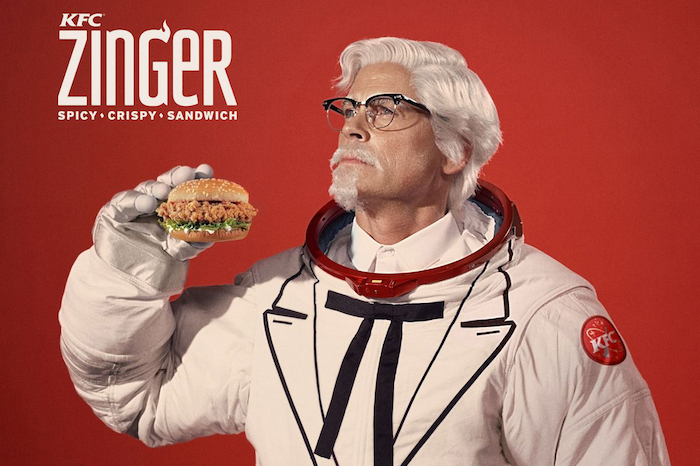 On Friday, Kentucky Fried Chicken revealed that beginning April 23, actor Rob Lowe would be the latest in a prestigious line of performers to fill the Colonel’s white suit for a nationwide campaign.

Brought in to advertise KFC’s new hand-breaded spicy chicken Zinger sandwich, the former Stern Show guest’s Colonel had his coming out in an inspiring, ambitious, ’60s-set ad. Lowe’s Colonel, dressed as an astronaut, gives a speech announcing that KFC is pushing the boundaries of their spicy chicken, with aspirations to launch the Zinger into space (below).

The development has a personal connection for Lowe. “My grandfather was the head of the Ohio chapter of the National Restaurant Association in the 1960s and took me to meet Colonel Harland Sanders when I was a kid. It was a big deal,” he said in a statement. “I thought this would be a nice homage to both Colonel Sanders and to my grandfather. Plus, we’re sending the Zinger chicken sandwich to space. You kind of can’t beat that.”

Lowe is the latest Stern Show guest to portray the Colonel, with Norm Macdonald, Jim Gaffigan, and Darrell Hammond having previously held the role.

The Zinger lands at KFC on April 24 at participating restaurants. Read more about the story here. Check out Rob’s 2014 appearance on the Stern Show here.