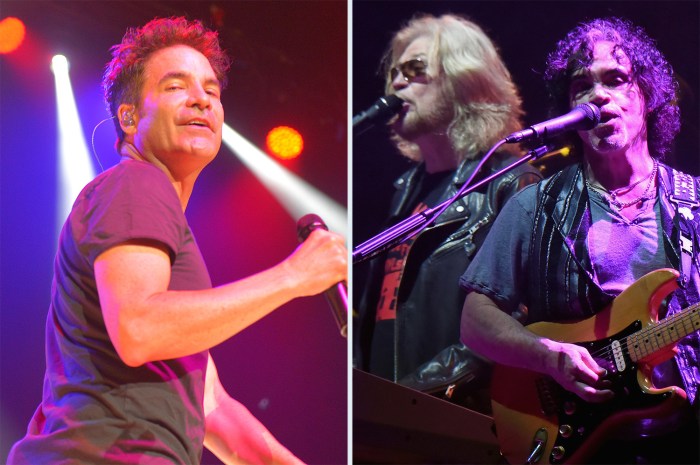 2014 Rock and Roll Hall of Fame inductees Daryl Hall and John Oates are teaming up with the Pat Monahan-led group Train for a North American summer tour. The arena concert series will see both acts performing full-length individual sets before teaming up on stage for a grand finale, according to reports.

“This is going to be a tour filled with fun as well as great music,” Hall said in a press release. “I love Train and have a close relationship with Pat Monahan, going back to our ‘Live From Daryl’s House’ show together.”

“Looking forward to an amazing tour with our buddies from Train and seeing all our fans around the country in 2018,” Oates added.

“I’ve known Daryl Hall and John Oates for a few years now and after being their fan my entire life, we now get to tour with them and spend time with legends in the world of music,” Monahan said. “This will be a career highlight for all of us in Train and a show that you won’t want to miss.”

The summer tour kicks off May 1 in Sacramento, Calif., with tickets going on sale in most cities on Jan. 28 at 10 a.m. local time.

Hall & Oates haven’t released a collaborative album since their 2006 holiday venture “Home for Christmas,” though each has published more recent solo material. Hall has joined the Stern Show multiple times over the years, but he and Oates never appeared in-studio together until 2015, when the duo made their debuts to discuss their careers with Howard and even brought out their guitars for a performance. Get more on their Stern Show debut here.

Train, meanwhile, is touring to support “A Girl, a Bottle, a Boat,” the band’s recently released 10th album. When Monahan and company joined the Stern Show most recently back in 2016 they were promoting a different album comprised entirely of covers: “Train Does Led Zeppelin II.” Watch drummer Drew Shoals wow Howard by covering Zeppelin’s impressively difficult “Moby Dick” drum solo (below).

Check out all the Hall, Oates, and Train concert dates below: