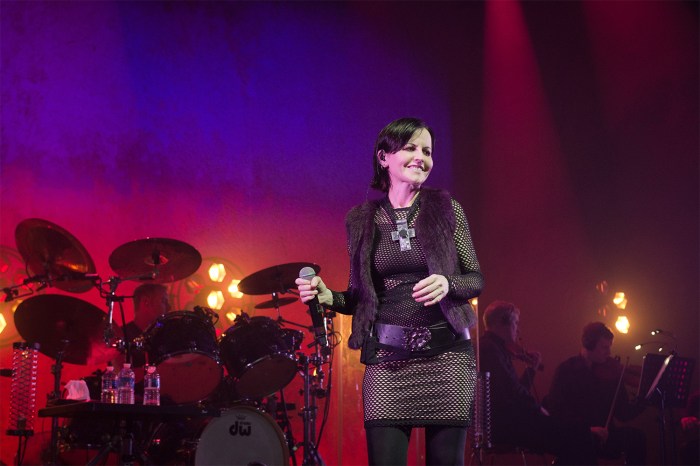 Dolores O’Riordan of the Cranberries performs at L’Olympia on May 4, 2017 in Paris Photo: Getty Images

Dolores O’Riordan’s presence with the Cranberries will linger on a bit longer.

The Irish rock band detailed plans to release two different albums featuring their recently deceased frontwoman: a brand-new album, which Dolores recorded her vocals for in 2017, and a 25th anniversary reissue of the band’s multi-platinum debut effort, “Everybody Else Is Doing It, So Why Can’t We?”

The album of new material was begun back in 2017, according to a post on the Cranberries’ official website signed by surviving members Mike Hogan, Noel Hogan, and Fergal Lawler. Dolores had already recorded the vocals before her death in January and the band hopes to have the new album “finished and out early next year.”

The Cranberries are collaborating with Universal Music for the reissue, due out later this year, which will include both a newly remastered version of the band’s debut and previously unheard bonus material. Released originally in March of 1993, “Everybody Else Is Doing It, So Why Can’t We?” is saturated with a slew of hits, including “Dreams” and “Linger.” The band originally planned to publish the reissue in March to coincide with the anniversary of its release, but after Dolores’ death the project was put on hold.

The acclaimed singer-songwriter was 46 when she died unexpectedly on Jan. 15 at a London hotel. The cause of her death wasn’t immediately made public, though a coroner is expected to reveal further details as soon as April. American metal band Bad Wolves dropped a Dolores-approved cover of the Cranberries’ hit song “Zombie” just a few weeks after her death and vowed to donate all proceeds from the track to her family. Take a listen here.