Side project performs tracks from David Bowie and Tom Petty, among others 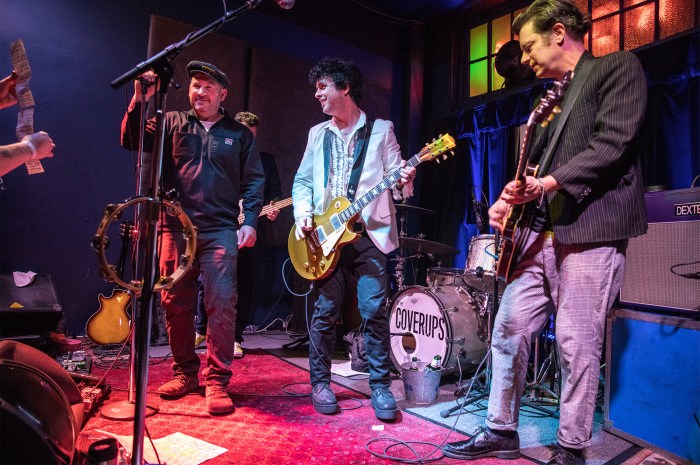 It looks like Robin Quivers isn’t the only person having hush-hush adventures in the City by the Bay.

Green Day’s Billie Joe Armstrong and Mike Dirnt secretly took the stage on Thursday at a small San Francisco dive bar and performed as the Coverups, a cover band dedicated to performing tracks from music greats like Tom Petty and David Bowie, according to reports.

Songs from last week’s set list included everything from Rick Springfield’s “Jessie’s Girl” and the Replacements’ “Color Me Impressed” to Bowie’s “Ziggy Stardust” and “Suffragette City”—two songs which also received a fantastic cover treatment on Howard Stern’s recent tribute to the late rocker.

In addition to Armstrong and Dirnt, the Coverups are comprised of Green Day’s touring guitarist Jason White, audio engineer Chris Dugan, and tour manager Bill Schneider. At one point even Green Day’s drummer Tre Cool reportedly sat in for a song at the 100-person gig in San Francisco’s Dogpatch neighborhood. It was the Coverups third show overall, following two January performances at the similarly small venue in Albany, Calif.

Coverup concerts are thus far hard to come by, but Green Day fans shouldn’t despair as Billie Joe, Mike, and Tre performed recently from the Stern Show studio and there are plenty of videos from their mini concert. Listen to the band’s full sit-down with Howard here and watch Green Day perform “Welcome to Paradise” live on the Stern Show (below).