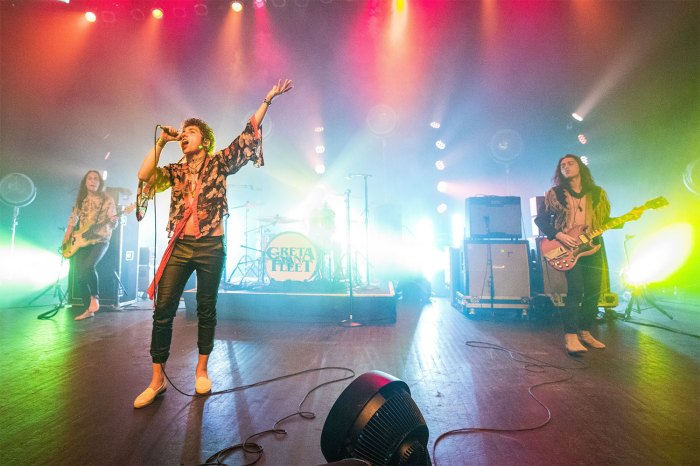 Sam Kiszka, Josh Kiszka, Danny Wagner, and Jake Kiszka of Greta Van Fleet performs at a sold out show on May 25 in Detroit Photo: Getty Images

The Michigan-based rock band has extended its largely sold-out world tour, adding over 25 dates in North America and Europe. The newly announced shows kick off in September with back-to-back nights at Seattle’s Paramount Theatre and conclude Nov. 15 in Manchester, England.

Formed in 2012, Greta Van Fleet consists of the Kiszka brothers Josh, Sam, and Jake as well as drummer Danny Wagner. The band has not yet released a full-length studio album, but that hasn’t gotten in the way of their surging popularity. As Stern Show fans might remember, Howard played Greta Van Fleet’s “Highway Tune” on-air in 2017 and compared their sound to Led Zeppelin. The song eventually hit No. 1 on the Mainstream Rock charts and has been viewed over 17 million times on YouTube.

Greta Van Fleet also found success earlier this year with a well-received cover of David Bowie’s “The Jean Genie,” recorded as part of Howard’s all-star tribute to the late, great rock and roll icon. “Trying to capture the flavor of that big rock and roll is what we, as Greta Van Fleet, love to do,” bass and keyboard player Sam explained of their cover.

Greta Van Fleet is currently playing a string of shows in the Netherlands and France but returns to the United States for a June 24 gig at the Ford Theatre in Hollywood, Calif. Get the band’s full 2018 tour schedule here.