Of course, her husband Keven included a few Stern Show shout-outs in his vows 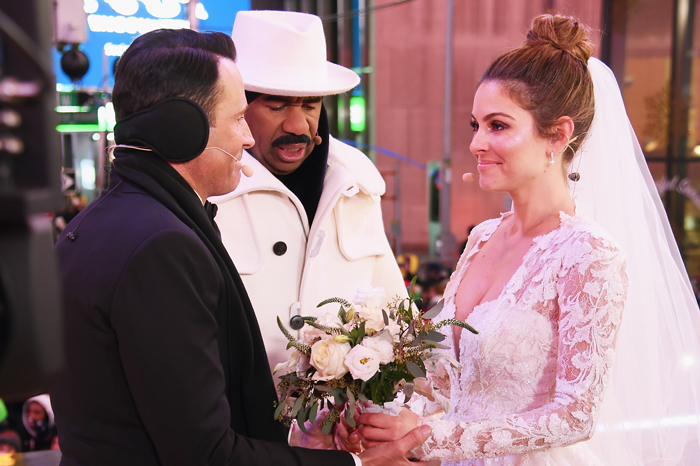 Two of the biggest Stern Show superfans ever just got married on live television. Maria Menounos and her now-husband Keven Undergaro wed in a surprise ceremony during Fox’s New Year’s Eve special on Sunday night. Not even Maria’s parents were aware she’d be tying the knot until moments before the nuptials.

Since the couple got engaged live on the Stern Show back in 2016, it was only fitting that Keven begin his vows to Maria with some choice quotes from Gary Dell’Abate’s infamous Love Tape.

Their big day wasn’t all Baba Booey lines, though – Keven also spoke from the heart, telling Maria, “I got to spend the last 20 years with the greatest human being I have ever known. Maria, you are a blessing not just to my life but an even bigger blessing to this whole world.”

Check out video from the ceremony (below).

Menounos wasn’t the only one wearing white for the televised event, either – TV personality Steve Harvey officiated the wedding and was decked out in bright white pants, a coat, and a fedora.

“We were planning this wedding for months,” Howard said, adding even members of the Wack Pack were going to be involved. But after talking to his wife Beth Stern, Howard said he was concerned Maria might want her wedding to be a bit more romantic, no matter how much they both love the Stern Show. That’s why when Keven came to him and explained their opportunity to tie the knot on New Year’s Eve, Howard gave them his blessing.

Congrats to Maria and Keven on getting hitched!