Steve Martin and Martin Short on Meeting Elvis, Getting Schooled by Selena Gomez, and the Origins of Their Decades-Long Friendship

Steve Martin was one of show biz’s most successful comics before he walked away from the stage in the early ‘80s with no intention of ever returning. His star only shined brighter over the next few decades as he authored books, released albums, collaborated on Broadway musicals, and starred in a string of blockbuster comedy films, but Martin wouldn’t return to stand-up until 2016. That year, he and fellow funnyman Martin Short collaborated on “An Evening You Will Forget for the Rest of Your Life,” a music-filled comedy tour which culminated in an Emmy-nominated Netflix special.

Martin and Short joined the Stern Show together for the first time on Wednesday, following the release of their latest hit collaboration, “Only Murders in the Building.” Howard was excited to welcome each legend back to the show and eager to learn more about their long friendship. He was also curious how Short had convinced Martin to come back to stand-up.

“If you have a friend it’s all the difference in the world,” Martin said.

Howard suggested the two men enjoyed a “bromance,” much to Steve’s chagrin. “This act that you guys have evolved into can only happen between two great friends,” Howard told them before jokingly asking if they’d ever seen each other nude.

“Not from the waist up,” Short responded with a laugh.

Howard wondered if Martin was better friends with Short or with “Saturday Night Live” head honcho Lorne Michaels, who along with composer Randy Newman actually co-wrote the “¡Three Amigos!”

“Who was the best man at your wedding?” Short countered. “It was Lorne. I was a bridesmaid.”

From Amigo to FRIEND

Martin and Short had plenty more to say about their involvement in “¡Three Amigos!,” the 35-year-old John Landis-directed comedy which served as the springboard for their enduring friendship. For starters, they assured Howard they’re still in constant contact with fellow comedy legend Chevy Chase—the third “amigo.”

According to a rumor Howard once heard, Martin and Short’s first run-in took place at Martin’s house just before filming and involved a backhanded compliment in which Short remarked how amazed he was by Martin’s apparent wealth considering the career choices he’d made along the way.

“That is absolutely true,” Steve told Howard, adding he thought both the joke and Short’s on-set antics were hilarious. “I remember walking to the set the first day,” he continued. “I’m walking with Chevy and we’re dressed up like Amigos, and then from behind me I heard Marty as Katharine Hepburn—what was the exact line?”

Considering he starred in, co-wrote, and basically conceived of the film, it’s unsurprising Steve Martin was heavily invested in its eventual success. “I had my heart into it,” he told Howard, explaining “¡Three Amigos!” was only moderately successful at the time but eventually gained a cult following. “[Decades later], I get a call and its Empire magazine … and they said we want to put you, Marty and Chevy on the cover of your magazine. And I said, ‘Why?’ They said, ‘Well, it’s the 25th anniversary of the ‘¡Three Amigos!’” I said, ‘So?’” he continued “And they explained it was sort of this cult thing [that] parents watch it with their kids.”

Steve and Marty’s conversations flow so organically one might assume they’re always improvising, but the duo said their rapport is actually the product of hard work behind the scenes.

“We don’t ad-lib our show,” Steve told Howard at one point.

Both men felt preparedness was integral to everything they do, whether it be their comedy tour, their TV show, or even just a talk-show appearance. Short, whom the New Yorker suggested might be the greatest talk-show guest of all time, told Howard he once prepped 18 pages of material before a David Letterman appearance.

“It’s not that I’m wanting to do 18 pages … but it gives me the confidence to go out there and say, ‘I am prepared.’ He may be off, I may be off, but at least I gave it the college try,” he explained.

“For me, I don’t want to bomb … it’s defensive,” Steve added, before recalling the time he debuted his baggy-suited Flydini character on Johnny Carson’s “Tonight Show.” He told Howard he’d rehearsed the bit quite a bit before appearing on TV, including two weeks in Atlantic City while opening for the Smothers Brothers.

Martin Short, meanwhile, admitted he avoided Carson’s show for several years before finally making his debut appearance toward the end of Johnny’s “Tonight Show” run. “I thought, ‘Okay, I’m a moron, it’s because I was afraid of him, because I love him so much.’ And when I finally did it he was so fantastic and so loose and so encouraging it was like a dream,” he said. “So … I did it nine times.”

Both men spoke highly of Letterman, who said farewell to “The Late Show” in 2015. “If you killed on Letterman you were the happiest human being you could be for a week. It was the greatest feeling in the world because we admired him and loved him so much, and if he laughed what better moment could [there] be?” Short said.

Steve Martin recalled meeting a wide range of celebrities throughout the course of his career, from comedy great Jerry Lewis to chess phenom Bobby Fisher. However, no anecdote piqued Howard’s attention more than his guest’s run-in with Elvis Presley. Martin said he was performing magic and comedy back then, opening up for the multi-talented performer Ann-Margret, who’d starred alongside the King in “Viva Las Vegas.” He’d heard Elvis might drop by one night to see the show, so Martin left his dressing room door ajar hoping Presley might wander in. His plan worked.

“He looked great, and he had the huge buckle, and he said, ‘Son, you have an oblique sense of humor,’” Martin recalled, telling Howard Elvis’s assessment of his comedy style was in fact “dead-on.”

But the encounter soon took a bizarre turn. “He said, ‘Wanna see my guns?’ And I said, ‘Uh, yeah.’ And he had three guns on him. He was very safety conscious … he dropped the bullets in his hand before he gave me the gun,” Martin told Howard. “Eventually I’m holding three guns and Elvis was holding 18 bullets. But he was very sweet.”

A Decade in the Making

Since debuting at the end of August, Martin and Short’s new series “Only Murders in the Building” has become one of Hulu’s most well-received comedy offerings. Co-created by Martin and John Hoffman (“Grace and Frankie”), the show follows three true crime-obsessed strangers who band together to investigate a murder in their apartment building.

“I had the idea for like 10 years,” Steve said of the concept. “I just kept it in my mind, didn’t really tell anybody, and finally I did pitch it to [eventual executive producer] Dan Fogelman and some great people. They said, ‘Do you want to be in it?’ I said, Well, I’ll do it if Marty does it.’ And that’s what happened.”

“What’s amazing about Steve is that he never gets writer’s block. No matter how hard you pray for it, it just doesn’t happen,” Short joked.

Though “Only Murders” found quick success, the duo admitted filming during a pandemic wasn’t always easy. “The director was not even allowed to take her mask off or her shield. She had a special helmet made of glass,” Short explained, giving Steve an opening to a hilarious impression of the director trying to give garbled notes in between takes.

Martin and Short are two of the most beloved comedians on the planet, but it’s actually one of their “Only Murders in the Building” co-stars who has amassed a whopping 325 million combined Twitter and Instagram followers: Disney starlet turned platinum recording artist Selena Gomez.

Howard was curious what it was like for his seasoned guests to share the spotlight with the young actress.

“I knew who Selena Gomez was, but I didn’t know her work that well. So, I looked her up on the internet and I realized at 28 she had done as many movies as I had,” Martin said. “We hit it off really well, almost immediately. Then as the series went on we developed that kind of rapport on the set that you want so badly,” he continued, explaining that despite being a “pop diva” she showed up to set on time and had always been a consummate professional.

“When we met Selena the first day of shooting, right away you knew she wanted to keep a joyful, loose, happy set,” Short agreed.

Martin, who literally teaches a comedy Masterclass, undoubtedly shared plenty of on-set wisdom with his “Only Murders” co-stars. As Howard learned on Wednesday, however, the schooling went both ways. Martin said it was Gomez who taught him about Cardi B and Megan Thee Stallion’s popular and incredibly explicit song “WAP,” which stands for “wet-ass pussy.”

“She just came up and said, ‘Do you know this song?’” Martin recalled. “Now, I knew songs existed that were very frank … but I didn’t know they were number one.”

“WAP” apparently wasn’t the only song on Selena’s mix tape. “What was the other song?” Martin asked Short. “’You’re a Fucking Ho’? She would sing it and we would laugh, you know?”

While Martin conceded music had evolved considerably since their younger days, he didn’t see it as a problem. “What’s so great about the way we used to do it?” he asked.

“Only Murders in the Building” airs Tuesdays on Hulu. 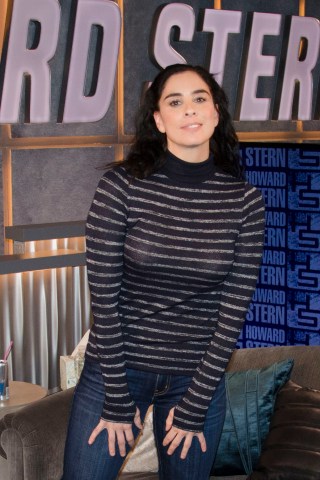 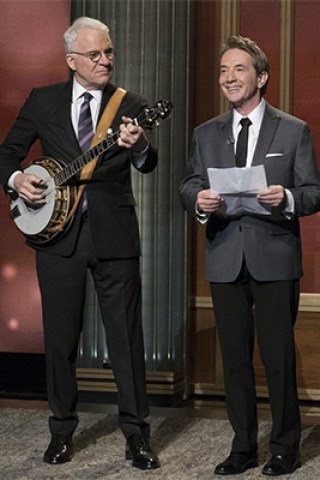 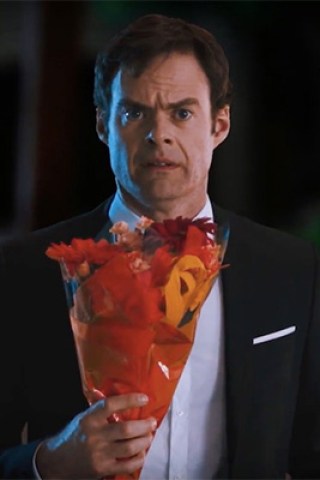 Steve Martin's 'Caroline' Is an 'SNL' Reunion
You Give us your email Address we'll give you even more howard!