"I'd give anything to know what those two are talking about," Howard says of their mentoring sessions 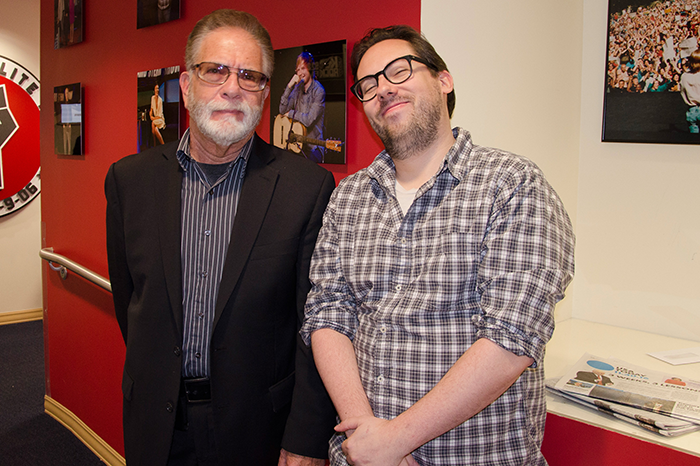 Stern Show staffers Ronnie “the Limo Driver” Mund and JD Harmeyer both spent their Thanksgiving holidays in the state of Ohio this year – the former with his fiancée’s family near Dayton and the latter with his girlfriend in Cincinnati.

The two were even supposed to meet up in the Buckeye state, but according to Ronnie, if he doesn’t make the plans, nothing ever happens. And unfortunately, things didn’t end up working out. “I was actually looking forward to meeting his father,” Ronnie told Howard Wednesday morning.

Apparently JD’s dad has spoken to the elder staffer on the phone over the years to thank Ronnie for looking out for his son and taking good care of him.

Ronnie recalled how when the mumbling media producer was fresh out of Full Sail University and traveling the country with the show, he’d make sure JD went out, had a good time, and met girls. “When we were on the road this kid was getting laid left and right,” he remembered.

Despite what Howard had previously thought, word from the back office was that when JD returns home nowadays, he is no longer the outcast, but the big success of the Harmeyer clan.

“You’re the big cheese and I never realized it,” Howard said with a laugh. “He’s the rock of the family.”

Even with the rise in social status, JD has reportedly been struggling to maneuver some personal decisions, which he declined to discuss publicly on the show.

Ronnie told Howard that he believes certain staffers give JD bad advice at times to lead him astray, so as a friend, the limo driver frequently pulls his protégé aside to straighten things out.

Neither JD nor Ronnie would reveal the content of their discussions, but Howard had a sneaking suspicion that it had to do with a possible wedding. “I think JD’s planning a proposal,” he deduced.

“I won’t tell him how to propose to his girlfriend … Jon [Hein] can handle that part,” Ronnie, whose own infamous proposal rang out over the Stern Show airwaves, countered.

Howard was intrigued: “I’d give anything to know what those two are talking about.”