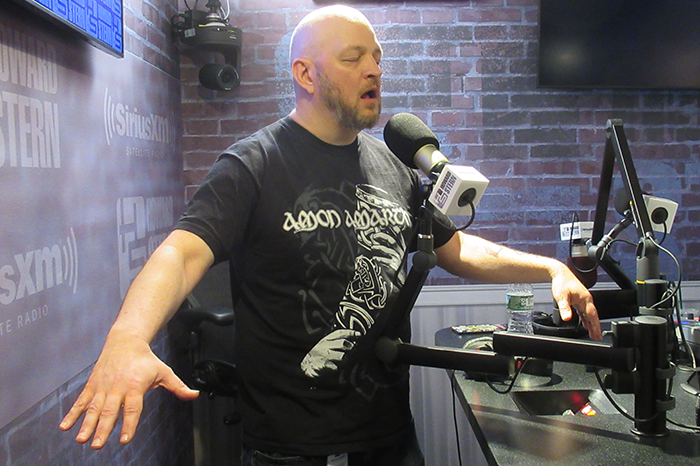 After days of verbal sparring with actor Michael Rapaport and two separate “Beastie Boys” parody songs recorded at his expense, Brent Hatley fired back with a diss track of his own on Wednesday.

As Stern Show listeners may remember, Brent began his journey into becoming a heavy metal vocalist one year ago when he bought instructional DVDs and even sought out private sessions with renowned coach Melissa Cross.

“She’s trained a ton of heavy metal singers – Randy from Lamb of God, the guys from Amon Amarth … Phil from All That Remains,” Brent told Howard.

Under Melissa’s tutelage, Brent has been training his voice through a series of exercises and warmup routines. Moreover, he’s also formed a band called Citizen’s Arrest with a few of his co-workers to begin recording music.

According to Brent’s wife Katelyn, he hasn’t stopped singing since. “We’ll be watching one of our favorite shows and he will just start belting out lyrics to his song or another heavy metal song, like, from Lamb of God or something,” she told Stern Show staffer Chris Wilding.

Hear Brent practicing a few of his vocal exercises (below).

“You look like Alf fucked Powder,” Brent quickly shot back.

With the unending war of words erupting in studio once again, Howard queued up Brent’s new song “Restraining Order,” recorded with his new band Death by Lightning, and officially premiered the deep-cutting track. Hear it (below).