Man Fined $25K for Flying Through the Air Tied to Balloons 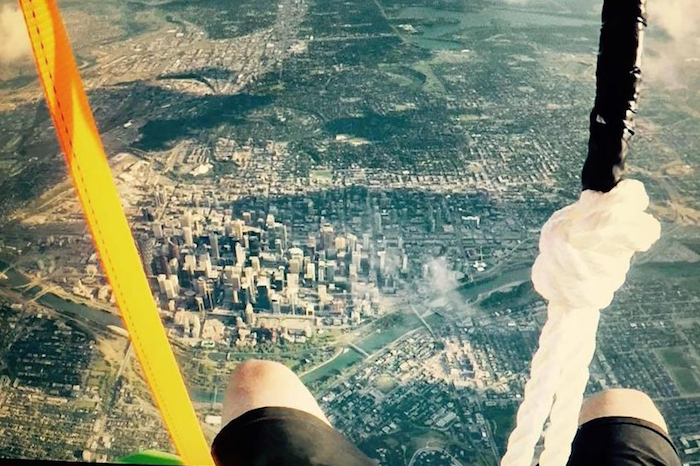 Eric the Actor was never too keen on the idea of flying with balloons, but one thrill-seeking Canadian proved the sky-high stunt can be done. Daniel Boria, inspired by the Pixar film “Up,” strapped several weather balloons to a lawn chair and took flight over Calgary back in 2015.

“Being in the air was incredible. I was looking up at the balloons and one would blow up and the whole chair would shake,” Boria told VICE. “I would look down and my feet were dangling off the side. It was the same view as you would see from your window when you’re in a 747.”

Boria’s journey was thrown off course by errant winds, forcing him to parachute back down to earth. When his feet hit the ground, though, cops arrested Boria for dangerous operation of an aircraft.

Boria, who now calls himself the “baloonatic,” was slapped with a $25,000 fine this week for his high-flying adventure. During sentencing, the CBC reports Judge Bruce Fraser referred to Boria’s actions as “dumb and dangerous” and “unconscionably stupid.” Additionally, Boria was determined to be a flight hazard as six planes took off from the Calgary airport during his stunt. Boria defended his actions in the name of Canadian ingenuity.

“Why climb the highest mountain?” Boria exclaimed outside the courthouse. “I chose to fly a chair; not because it is easy but because it is hard. Because that goal served to organize and measure the best of our energies and skills.”

The Stern Show came close to getting Eric the Actor up in the air in 2007 after Jimmy Kimmel offered him tickets to “American Idol” so long as the Wack Packer flew with balloons. Though Eric expressed interest, the bit never happened. Sadly, Eric the Actor passed away in 2014.

Check out a video of Boria preparing for his flight, as well as the takeoff itself (below).