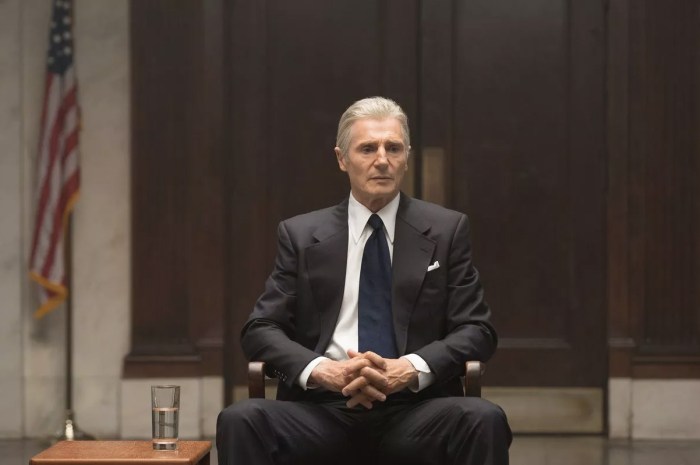 Liam Neeson fights government corruption in the first trailer for “Mark Felt: The Man Who Brought Down the White House,” an upcoming political thriller exploring the secret identity of “Deep Throat,” the government mole who helped journalists Bob Woodward and Carl Bernstein expose Richard Nixon’s involvement in the 1972 Watergate break-in.

Neeson plays the titular informant Mark Felt, a former FBI Associate Director who turned against his own government to expose corruption and misconduct at the highest levels.

“What about the President? Is the President lying?” a character asks him at one point in the trailer (bottom).

When Ike returned to the show in May, he spoke to Howard about co-starring in “Mark Felt” as an FBI employee. He also revealed Neeson—who plays his boss—gave him valuable acting advice during one of the film’s crucial scenes in which Ike was supposed to get angry.

“He takes me aside, and he goes, ‘Hey Ike … I want you to remember, in this movie, I’m your boss and you’re being fucking rude to me right now. So, on this next take, don’t be fucking rude,'” Ike told Howard. “He gave me a great note.”

Listen to more of Ike and Howard’s conversation (below).

“Mark Felt: The Man Who Brought Down the White House” hits theaters Sept. 29. Watch the trailer (below).