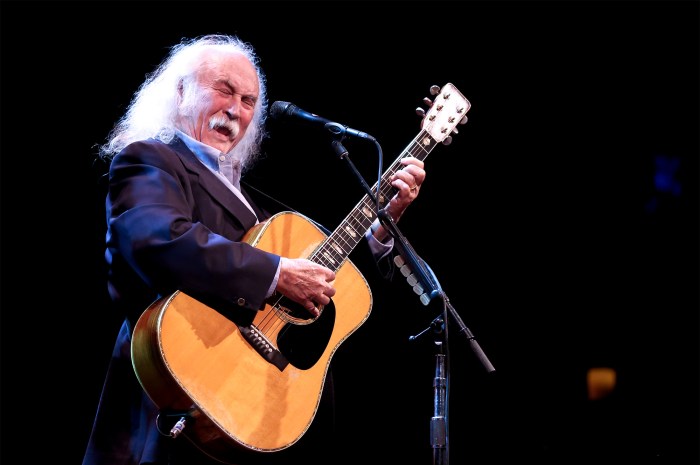 Written and performed by Crosby and 33-year-old singer-songwriter Becca Stevens, the song seemingly draws heavily on their experiences on tour. “We both spend a lot of time on the road,” he told Billboard in an interview. “After the second or third week you don’t know where you are. You’re out there somewhere, and all the cities look roughly the same, and you lose track.”

Listen to the song (below).

This is the second song the two-time Stern Show guest and two-time Rock and Roll Hall of Famer has shared from his album “Sky Trails,” his sixth solo studio effort. Check out its first single “Sell Me a Diamond,” co-written by him and his son James Raymond, here.

When David returned to the Stern Show studio in 2015, he spoke to Howard about his years with the Byrds and Crosby, Stills, Nash, & Young, as well as the feud he had with CSNY bandmate Neil Young. “I’ll tell you the truth about that … I screwed up. I shot my mouth off when I shouldn’t have,” Crosby explained. Listen to the conversation (below) and click here for more from the interview.

“Sky Trails” hits shelves Sept. 29 and Crosby will hit the road once more in October for a North American tour. Get tour details here and get more on this fall’s upcoming music releases here.