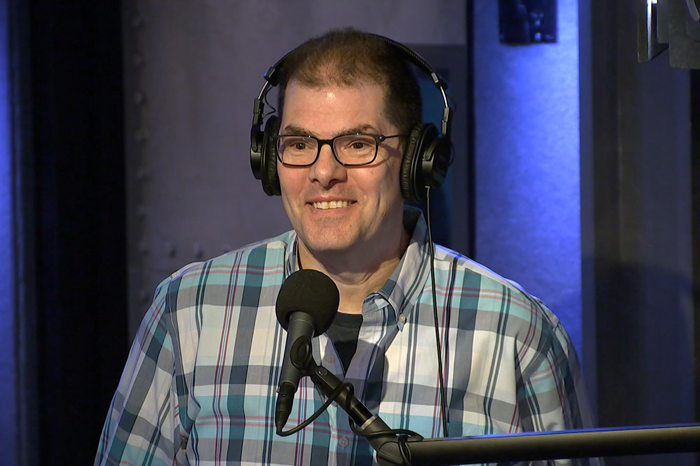 Stern Show staffer and resident TV expert Jon Hein joined Howard in the studio on Monday to discuss his television viewing habits, his reactions to Sunday night’s Golden Globe Awards, and which shows are worth watching these days.

Thankfully for fans in search of new a series to binge, the “Jump the Shark” originator also recently compiled his Top 10 TV Shows of 2018. Check out Jon’s list (below) and get more info on his site here.

Ralph Macchio and William Zabka star in “Cobra Kai,” YouTube’s “Karate Kid” comedy series set nearly 35 years after the events of the first film. “The story includes lots of callbacks to the original and a few surprises.” Hein explained. “This is how you revisit a mid 80’s classic with what’s left of the original cast in an entertaining way.”

“Game of Thrones” star Richard Madden just won a Golden Globe for his role on Netflix’s “Bodyguard,” a thriller about a war veteran turned London cop who finds himself embroiled in a massive terrorist plot to bring down the British government. “Six episodes fly by in this BBC series,” Jon writes, adding “The ending is not great, but the ride to get there will have you on the edge of your seat.”

Many considered “The Kominsky Method,” Netflix’s Chuck Lorre-helmed comedy series about two lifelong friends giving Hollywood one last go, a surprise winner at the 2019 Golden Globes. But don’t try telling that to Jon who put the series at number eight on his best-of list well before Sunday’s awards were handed out. “Michael Douglas and Alan Arkin showcase their chops and make it work,” he explained. “I’m still laughing at the second episode which shows all that a Hollywood funeral can be.”

Two past Stern Show guests, “Saturday Night Live” veteran Bill Hader and “Happy Days” actor Henry Winkler, star on “Barry,” the next critically acclaimed show on Jon’s list. Barry (Hader) is a socially awkward hitman who discovers a new passion after following one of his targets to an acting class put on by legendary coach Gene Cousineau (Winkler). Jon described the HBO comedy series as “dark, funny, and extremely poignant,” adding Winkler deserved the 2018 Emmy he won for his role.

Kristen Bell stars as a hilariously mean young woman who dies and wakes up in a Ted Danson-run version of heaven on “The Good Place,” NBC’s philosophy-laden sitcom currently airing its third season. The show is “smart, stupid, and surprising” at the same time, according to Jon—an unusual accomplishment for network fare.

Recent Emotional Friends Fantasy Football League runner-up Michael Rapaport comes in fourth place on Jon’s list with “Atypical,” the actor’s critically acclaimed Netflix drama on which he plays father to an 18-year-old boy on the Autism spectrum. “The acting and writing are exceptional, the laughs are well earned, and you feel so much for all the characters,” Jon wrote. “It’s genuinely heartwarming and I’m glad there will be a Season 3.”

Golden Globes host Sandra Oh took home an award of her own on Sunday night for her work as a spy tracking a deadly female assassin (Jodie Comer) on BBC’s “Killing Eve,” Jon’s third-ranked show of 2018. “’Barry’ wasn’t the best show featuring a troubled assassin. ‘Killing Eve’ is smart, funny, and gets pretty dark,” he said, calling it the best new show of 2018.

Keri Russell and Matthew Rhys’ Cold War-set spy series “The Americans” came to an end in 2018 after six seasons on FX. “I’ve been on this Russian bandwagon since it started and 1987 was the right place for it to come to a stop … The finale was satisfying and full of surprises – a fitting end to an underrated drama,” Jon wrote.

AMC’s “Better Call Saul” and its star Bob Odenkirk take home the top honors on Jon Hein’s list of best TV shows in 2018. Here’s what Jon had to say: “It’s not better than ‘Breaking Bad’ — but it’s getting awfully close. The spinoff continues to be just as captivating as Jimmy McGill [Odenkirk] drifts into Saul Goodman territory. There are no better TV characters than Jimmy, Kim, Mike, and Gus. We know how it turns out for most when Walter [Stern Show regular Bryan Cranston] enters the picture, but for now, there’s no better story worth watching.”