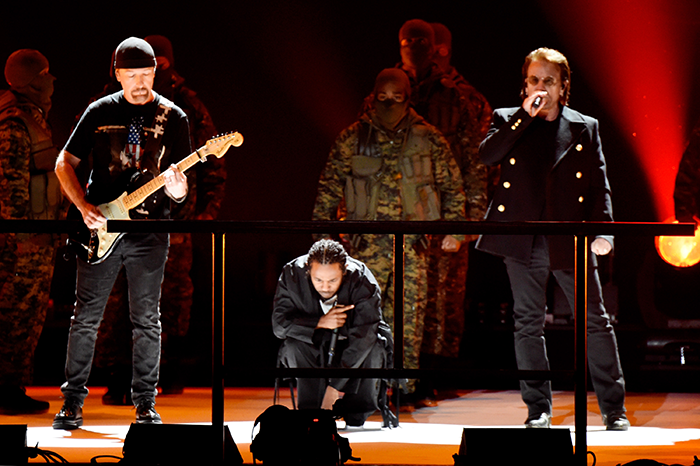 The 60th annual Grammy Awards were broadcast from New York City on Sunday evening and the show was packed with performances by Stern Show guests.

Kicking off the night, rapper Kendrick Lamar dazzled the audience with a powerful performance featuring cameos by U2 and comedian Dave Chappelle. In December, Kendrick dropped by the Stern Show and told Howard all about his album “DAMN.,” which wound up winning five Grammys on Sunday night.

U2 also returned later in the broadcast to perform “Get Out of Your Own Way,” off the band’s new “Songs of Experience” album, on location near the Statue of Liberty. Hear Bono and the Edge perform an acoustic version of the tune for Howard (below).

Lady Gaga delivered another unforgettable rendition of “Million Reasons” accompanied by producer Mark Ronson on guitar. When she visited the show in 2016, she told Howard the song was actually written for men. “I thought maybe if the guy could hear from us, how we feel, maybe he would understand a little bit more how deep it goes, how much we really love you, and how much we really need that love in return to be protected,” she explained. Hear her perform the tune in the Stern Show studio (below).

Per tradition, the Grammys also featured a number of duets. The legendary Sting teamed up with Shaggy to give a new take on his solo hit “Englishman in New York.” The two have been in the studio recently working on a new album. Miley Cyrus, meanwhile, joined Elton John onstage to sing his classic “Tiny Dancer.”

And while Miley covered Tom Petty’s “Wildflowers” during her Stern Show debut, it was fellow guest and country star Chris Stapleton who took on the song alongside Emmylou Harris during music’s biggest night.

For more on the Grammys and to see all of the winners, click here.