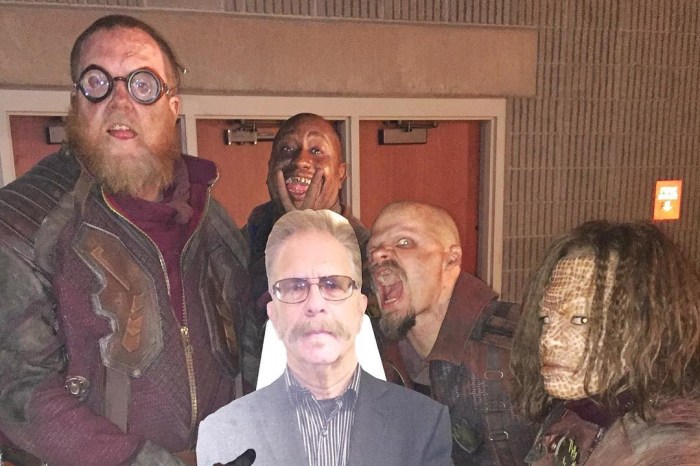 Director James Gunn dropped a pretty big bomb for Stern Show fans who enjoy his Marvel movies: Flat Ronnie made a secret cameo in his recent blockbuster “Guardians of the Galaxy Vol. 2.”

Gunn shared the news on social media over the weekend in time for his film’s debut on Netflix. He revealed even the most observant of super fans had failed to find many of its Easter Eggs—the well-traveled Flat Ronnie cutout included.

Now that #GuardiansoftheGalaxyVol2 is out on @netflix, you can really search out all the Easter eggs – like this #FlatRonnie from the @sternshow, hidden somewhere in the film (VERY hidden, but it’s there). And yes it’s also true that the answer as to who created Rocket is also deeply hidden in the film. . #behindthescenes #ravagers #howardstern #movie #movies #netflix #scifi

Of course, Ronnie “the Limo Driver” Mund isn’t the only Stern Show staffer who can be seen in “Guardians of the Galaxy Vol. 2.” As previously discussed on the show, Richard Christy enjoyed a proper cameo in the film. Though his role wasn’t quite as big as that of stars Chris Pratt, Zoe Saldana, Vin Diesel, or Stern Show veteran Bradley Cooper, Richard did have a speaking part.

“I’m a ravager. It’s awesome!” he explained to Howard back in May. “I have a line, too,” he added, revealing his character yells: “Down there!”

I wish I could look like this every day #GotGVol2 @JamesGunn @Guardians #downthere! pic.twitter.com/RojVxCEZTx

The Stern Show connections don’t stop there, either. In April, ahead of the release of the film’s soundtrack “Awesome Mix Vol. 2,” Gunn revealed the collection had been crafted with Howard in mind. Specifically, he said he was inspired to include Cat Stevens’ “Father and Son” after hearing Howard attempt to perform it back in 2014. Listen to the inspirational Stern Show moment (below).