Bon Jovi, Dire Straits, The Cars, Nina Simone, and The Moody Blues to Join Rock and Roll Hall of Fame 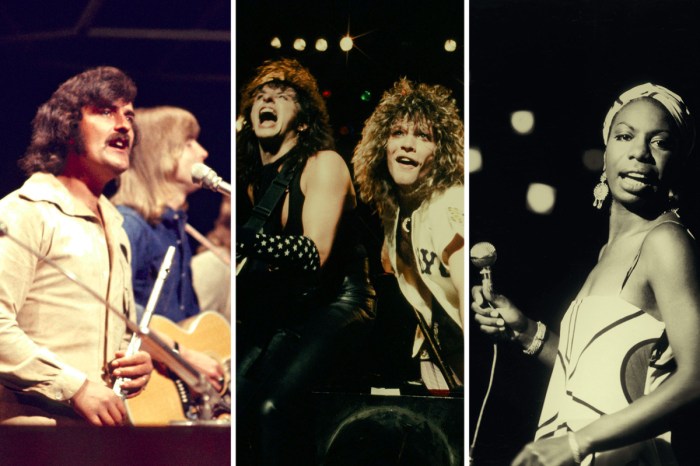 The Rock and Roll Hall of Fame has announced its 2018 class of inductees: Dire Straits, the Cars, the Moody Blues, Nina Simone, and repeat Stern Show guests Bon Jovi. The induction ceremony, set for next April, will also honor music pioneer Sister Rosetta Tharpe with the Award for Early Influence.

It will be a posthumous recognition for legendary singer Simone, who died in 2003, as well as Tharpe, who died in 1973. Several of the remaining acts have already discussed the possibility of performing at next year’s ceremony, with Bon Jovi and the Moody Blues announcing they’re willing to reunite with former band members, according to reports.

To be eligible for induction, artists and bands must have released their first commercial recording at least 25 years prior to the year of induction—meaning the 2018 nominees had to release their first official recording no later than 1992.

This year’s nominees were announced back in October, with Dire Straits, the Cars, the Moody Blues, and Nina Simone scoring their first ever nomination. In November, Stern Show staffers Gary Dell’Abate and Brent Hatley got into an on-air debate over which acts deserved to be inducted.

Gary, a voting member of the Rock and Roll Hall of Fame, revealed plans to cast his ballot for all five of the rock acts which wound up earning a spot in next year’s ceremony.

Brent, who could not cast a vote, unsuccessfully pled his case for the band Judas Priest. “There’s an anti-heavy metal bias going on,” he explained.

Bon Jovi, the youngest act inducted this year, last returned to the Stern Show in 2016 to perform in the studio and sit down for an interview with Howard. At one point, Howard asked frontman Jon Bon Jovi why his prolific and popular band hadn’t yet earned entry into the Rock and Roll Hall of Fame. “We have every criteria,” Jon told Howard. “It is what it is.”

The 33rd annual induction ceremony will be held on April 14 at Cleveland’s Public Hall. The event will air later on HBO and SiriusXM.