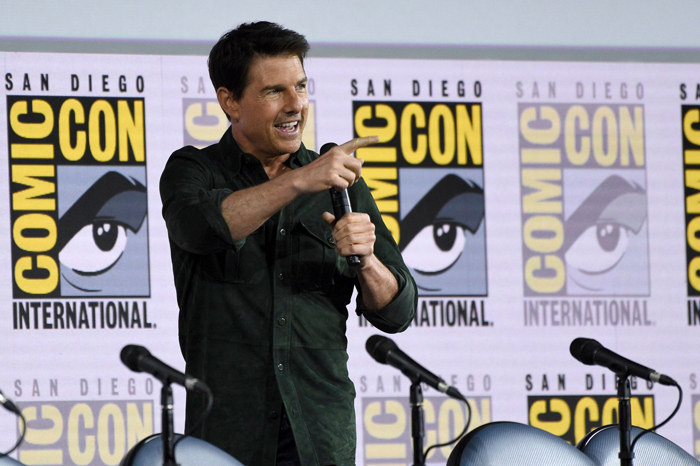 Hollywood studios and networks debuted countless new trailers at San Diego Comic-Con 2019 over the weekend, and now they’ve finally published most of them online for the rest of the world to see. From comic book adaptations to long-awaited sequels, check out the annual convention’s most talked-about trailers (below).

ABC dropped plenty of big news for “Marvel’s Agents of S.H.I.E.L.D.” fans at this year’s Comic-Con. In addition to announcing the show’s upcoming seventh season would be its last, the network dropped a sizzling new trailer previewing the final four episodes of Season 6, continuing on Friday.

Star City’s bow-wielding vigilante Green Arrow (Stephen Amell) lays down his quiver for good next season as “Arrow,” the CW’s first of several DC Comics-inspired superhero shows, concludes its eight-year run. The show dropped a new trailer at SDCC which reflects on the events of Season 7 while teasing what lies ahead with Season 8, premiering Oct. 15.

Jefferson Pierce (Cress Williams), a.k.a. the CW’s titular hero Black Lightning, must figure out how to balance ridding the streets of evil with raising two young women who have superpowers of their own in the trailer for Season 3 of “Black Lightning,” debuting Oct. 21.

Speedster Barry Allen (Grant Gustin) squares off against the metahuman-hating villain Bloodwork (“Heroes” Sendhil Ramamurthy) in the trailer for “The Flash” Season 6, debuting Oct. 8 on the CW.

The teaser for DC Universe’s animated series “Harley Quinn” begins with a warning about explicit language, adult themes, and violence, telling fans pretty much everything they to know about the cartoon chronicling the expletive-laden misadventures of Harley Quinn (voiced by Kaley Cuoco), a villainous DC Comics vixen who was memorably played by Margot Robbie in “Suicide Squad” and once even shouted “Hit ‘em with the Hein” in a Batman video game.

“The Man in the High Castle”

Amazon has shared a smattering of teasers ahead of the fourth and final season of its Philip K. Dick-inspired and Ridley Scott-produced sci-fi series “The Man in the High Castle,” debuting Nov. 15. The new clip shows off the first few minutes of the new season, following Juliana Crain (Alexa Davalos) as she travels to another dimension where the Allies have apparently won World War II and the Beach Boys are still a thing.

Few SDCC 2019 offerings received more attention than the first big trailer for Sir Patrick Stewart’s “Star Trek: Picard,” in which the actor and past Stern Show guest reprises the role of the now-retired Starfleet captain Jean-Luc Picard who once boldly commanded the U.S.S. Enterprise on “Star Trek: The Next Generation.” The new CBS All Access series debuts in 2020 and, if the Borg, Data (Brent Spiner), and Seven of Nine (Jeri Ryan)-filled SDCC trailer is any indication, fans should expect quite a few surprises.

“Picard” may be the big draw for Trekkies at San Diego Comic-Con 2019, but CBS also beamed down the Season 2 trailer for “Short Treks,” an anthology series comprised of “Star Trek”-inspired short films. Arriving in the fall, the new batch of episodes tells standalone stories about everything from those troublesome tribbles to Spock’s very first day on the U.S.S. Enterprise. One episode reportedly even relates to “Picard.”

Kara Zor-El (Melissa Benoist) takes flight once again as Supergirl on Season 5 of the DC Comics-inspired CBS series, returning Oct. 6. The trailer for the new batch of “Supergirl” episodes shows the Woman of Steel battling against everything from ferocious new villains to social media addiction. It also offers glimpses of two new characters played by Staz Nair (“Game of Thrones”) and Julie Gonzalo (“Veronica Mars”).

The first “Terminator: Dark Fate” trailer was chock-full of explosive action and memorable one-liners, but for most fans of the franchise the real treat was watching Linda Hamilton and Arnold Schwarzenegger share the screen once more and seeing James Cameron’s name listed as one of the new movie’s writers and producers. In the SDCC “Dark Fate” featurette, all three cinematic legends offer insight into just how closely they’ve been collaborating with director Tim Miller (“Deadpool”) to make the sixth “Terminator” film one longtime fans will love.

Tom Cruise feels the need for speed once more in the very, very long-awaited official trailer for “Top Gun: Maverick.” The trailer for the 2020 film features Cruise back in the cockpit along with plenty of sky-high action as well as several nods to the 1986 original, including motorcycles on runways, shirtless volleyball matches, and heated confrontations between Cruise and his superior officer (played this time by Ed Harris).

The teaser for Andrew Lincoln’s first of three “Walking Dead” films was released at Comic-Con 2019, though the 24-second clip features only some graphics, the sound of a helicopter whooshing by, and the AMC show’s ominous score. The trilogy will reportedly focus on the hit zombie drama’s protagonist Rick Grimes (Lincoln) and, according to the message at the end of the teaser, the first film will only be shown in theaters.

Nazis were noticeably absent from Comic-Con’s “Man in the High Castle” offering but they wound up making a surprise cameo in HBO’s trailer for “Westworld” Season 3. Unlike the sci-fi drama’s most recent teaser, featuring a robot making her way in the human world, this one deals mostly with the ongoing madness and mayhem at the show’s many robot-filled theme parks, including one modeled after Germany circa World War II.