See some of the most popular artwork inspired by the staff, Wack Pack, and more 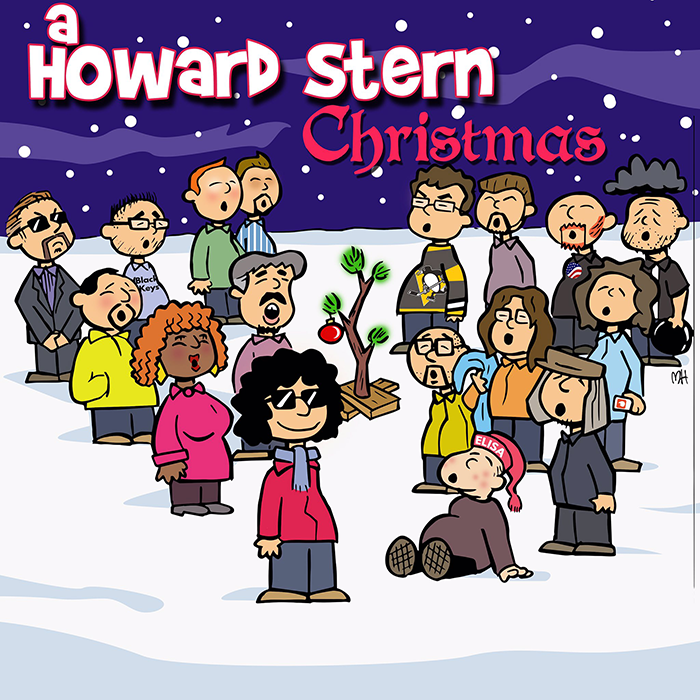 With another year of the Stern Show in the history books, it’s time to take a look back at everything that happened, but this time through the lens of the talented artists in our audience.

Check out some of the impressive pieces of fan art from 2017 (below).

Howard’s cohost Robin Quivers had a number of standout moments, including a renewed dedication to her music career.

Great to hear @sternshow back this morning, but most of all, great to hear Baltimore’s own @rqui because she just, knows… #ChooseToWin pic.twitter.com/LMQOwGiqKN

Moreover, when she wasn’t singing her heart out, Robin was still making music by way of her beloved collection of wind chimes.

And she had a … unique method for watching the rare solar eclipse in August.

Richard Christy, meanwhile, made the surprise announcement in May that he would be having a son, setting off a wave of celebratory works of art.

Heeeeeey! Congratulations to Richard Christy who has a new bub of his own. @cwotd @sternshow #newdad #Congratulations #illustration pic.twitter.com/miecXFqf5b

Wanted to do a little #sketch to congratulate Richard Christy of the @sternshow on his upcoming bundle of joy! Congrats! #richardchristy #howardstern #baby #daddy #pumpkinale #halloween

JD Harmeyer had equally exciting news when he announced—albeit on Twitter—that he proposed to his girlfriend and she said yes!

Congratulations to JD on his engagement that we first heard about on #facebook! @sternshow @jdharm #shesaidyes #illustration pic.twitter.com/oRYhvPHPnf

Sal Governale entranced listeners with his tale of an otherworldly out-of-body experience as well as his choice of footwear during a snowstorm.

Brent Hatley also turned heads with his ambition to make a citizen’s arrest.

It’s no surprise that members of the Wack Pack inspired some of the most creative work from the audience.

When Steve from Florida took his Walk of Shame to reclaim the name Bobo, he spurred a slew of artistic renditions of the historic moment.

Shame! Steve from Florida lets it all hang out for his #WalkofShame in the most fabulous outfit made from green tape. @sternshow @bobohstern pic.twitter.com/or1IjnEoOa

Furthermore, in July Medicated Pete spent the day selling cars at Legend Auto Group with Wayne Siegel and became the star of quite a few pictures.

Tan Mom had a breakout year in 2017 between her prank call to Howard as “Petunia,” her infatuation with Stern Show staffer “Lemet,” and her memorable reaction to finding Richard and Sal in a compromising position.

Jeff the Drunk and his trolls as well as Mariann and her biggest fan Ann Marie also made their mark on the year.

With the entire month of October renamed as Cocktober featuring cock-filled events with Richard Christy, Sal Governale, the crowning of Miss Cocktober, and more, it’s no wonder the audience responded with some fitting work.

Hit ’em with the Hein

2017 also saw “Hit ‘em with the Hein,” a catchphrase popularized by Jason Kaplan in honor of his coworker Jon Hein, spread like wildfire from sportscasts to news reports to TV shows and everywhere in between.

I’ve done many images of Jon…. but this one I like the best. pic.twitter.com/W9HvjIftK1

Additionally, over the course of the year, the Stern Show marked numerous anniversaries.

First, in February, Wendy the Slow Adult celebrated 15 years as a member of the Wack Pack.

#WCW: Wendy the Slow Adult, who’s been blowing her mind up on the @sternshow for 15 years #wendytheslowadult #illustration pic.twitter.com/KaSmobgs2i

Later in the year, the staff honored Richard Christy for his 13 years spent entertaining fans on the show.

Happy anniversary to the great Richard Christy, who’s given us 13 years of gay antics on the Howard Stern Show! @sternshow @cwotd #hijinks pic.twitter.com/vRmiclo1g8

2017 was also a year of sadness with the loss of longtime Wack Packer Nicole Bass in February. Read her full obituary here and check out some of the fan art in her memory (below).

And this is only the tip of the iceberg for the amazing art out there. Thanks to all of the fantastic Stern Show fan artists—see you in 2018!